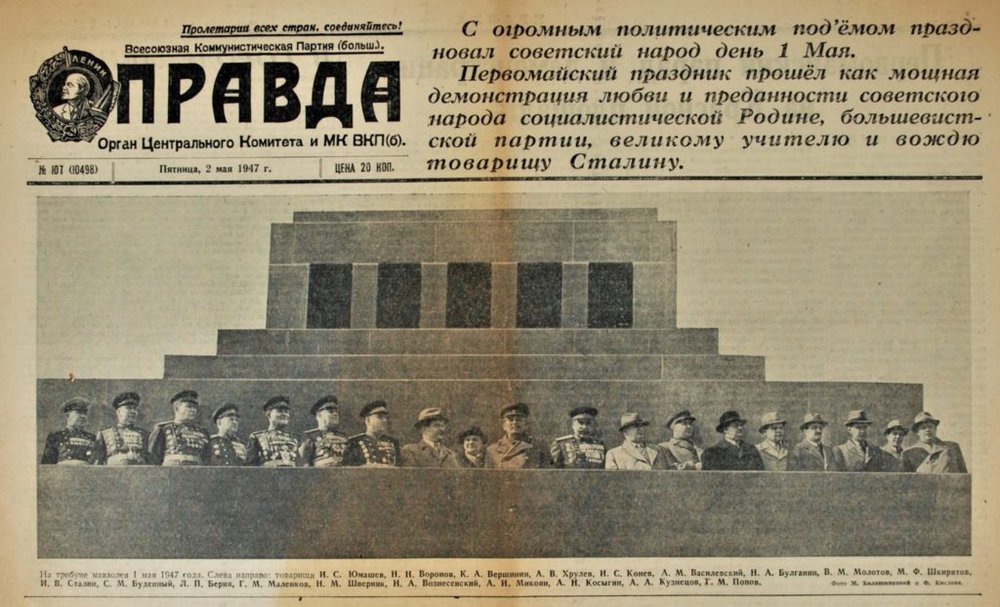 SCRC is home to the collections of many prominent twentieth-century American cartoonists and journalists, some of whose works deal with one of the century’s most omnipresent forces: the Soviet Union. Three of these figures, Communist activist Earl Browder and political cartoonists Bill Crawford and Don Wright, engaged with the Soviet Communist Party’s daily newspaper, Pravda in their articles and cartoons. In doing so, the three men showcase the distinctly different ways propaganda and bias emerged in Soviet and American presses at this time.

While multiple newspapers were published in the Soviet Union, none was more far-reaching than the Soviet Communist Party’s central organ, Pravda (Russian for “Truth”). The publication powerhouse ran under Communist control from 1912 to 1991 and, at its height of circulation, reached 11 million people daily. Through Pravda, the party disseminated official policy while also presenting a strictly controlled image of communism’s reception abroad. 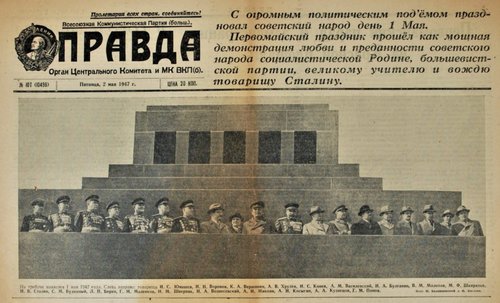 In efforts to present an image of widespread international support for the Soviet Union, Pravda employed American writers and cartoonists living abroad as foreign correspondents, some of whose collections are now held in SCRC. Noted American radical artists William Gropper and Fred Ellis, for example, both worked for the newspaper while living in Russia in the 1920s and 1930s, respectively. And in 1966, SCRC acquired the papers of one of Pravda’s most prominent American correspondents, Earl Browder.

The Earl Browder Collection contains the activist’s manuscripts, correspondence, memorabilia, and photographs, in addition to over 1,350 titles from his personal book and pamphlet collection. It is a critical collection because Browder was the General Secretary of the Communist Party USA from 1930 to 1945 and a two-time U.S. presidential candidate. He was a seminal party member until being expelled in 1956 for promoting a peaceful coexistence between socialism and capitalism. Browder continued to write for Pravda in the years after his excommunication and remained a committed socialist until his death in 1973.

SCRC holds a number of articles Browder wrote for Pravda, all of which are exaggerated accounts of socialism’s influence in the United States. A potent example of this is the 1939 article, “Lenin and his Influence in America,” which Browder begins by declaring: “Fifteen years after the death of Lenin, the influence of his ideas in America has grown to the proportion of a major factor in the life of the country…Lenin’s penetrating vision revealed the many affinities existing between the people of the Soviet Union, land of socialism, and the people of the United States.” This faithfully reflects the serious manner in which Browder wrote his Pravda reports, amplifying the Soviet Union’s impact on the American general public.

Being a state-run political apparatus, the heavily regulated and serious Pravda existed solely to push Communist policy. SCRC’s issues of Pravda contain few images and no cartoons; the editors clearly prioritized policy over entertainment. Through Browder and other foreign correspondents, it kept the Soviet public abreast on American news, although always biased in favor of the Communist party.

Conversely, the American public maintained an awareness of information being circulated by Pravda throughout the twentieth century, as evidenced in two works in SCRC collections by prominent cartoonists, Bill Crawford and Don Wright. While Soviet news contributors wrote from a serious standpoint, American cartoonists could afford to be more glib in their presentation of foreign matters. No major periodicals were controlled by political factions and because the American press operates within the free-market economy, its news publications have always had the dual task of informing and entertaining to attract readers. Rooted in comedy, the cartoon remains a staple of American newspapers. It is an effective tool wielded to deliver sharply critical commentary made more palatable through humor. 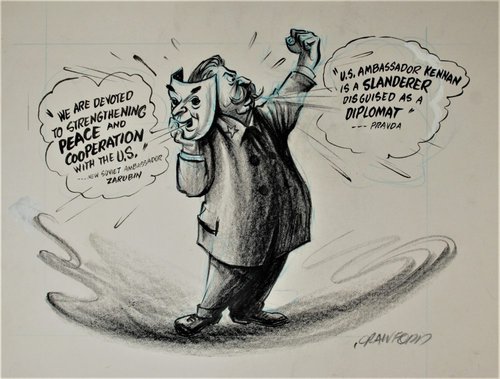 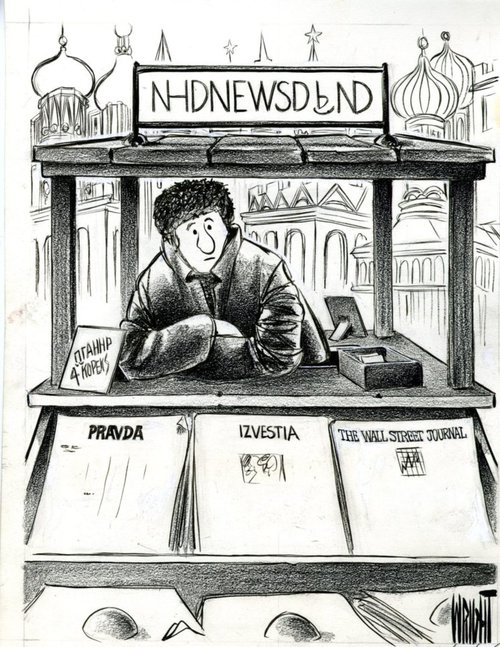 Crawford’s cartoon, published sometime between 1952-58, shows Josef Stalin holding a mask in his right hand. “‘We are devoted to strengthening peace and cooperation with the U.S.’...New Soviet Ambassador Zarubin,” assures the mask to the American audience. Meanwhile, Stalin faces the opposite direction and speaks directly to the Soviets (as quoted in Pravda) “‘U.S. Ambassador is a slanderer disguised as a diplomat’...Pravda”. This showcases the deep cynicism of what Americans believed were false promises being made by the Soviets. Its message was clearly that the Soviets were not to be trusted, which stoked the flames of fear being nurtured during the Red Scare era.

Although less explicit than Crawford’s cartoon, Wright’s still plays into the fearmongering aspects of anti-Soviet propaganda. This undated cartoon published in the Miami Herald shows a dejected man at his newsstand in Moscow selling three publications: Pravda, Izvestia, and the Wall Street Journal. The paranoia-imbued message Wright delivers says that the Soviets were closely monitoring the American economy.

The American and Soviet presses would keep their readerships informed on the current events of each other’s countries throughout the Cold War. Their delivery styles were markedly different due to the nature of state-run versus free-market publications, yet similarities are found in the biased and propagandistic nature of their foreign news content.