An Artist in Pictures: Photographs of Grace Hartigan

In the Grace Hartigan Papers held at SCRC are photos of the vibrant Abstract Expressionist painter. 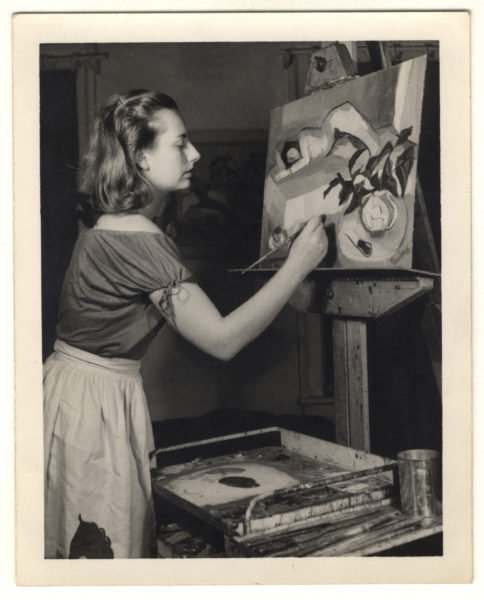 "I am a process artist. You start off with an idea and then ideas keep coming as you're creating and eventually the painting tells you what it wants . . . I paint things that I'm against to try to make them wonderful very often, to give them the magic they don't have . . ." Grace Hartigan, Smithsonian American Art Museum documentary

In the Grace Hartigan Papers held at SCRC, the vibrant Abstract Expressionist paintings Hartigan is best-known for are rendered almost exclusively in black-and-white photographs. Rather than tempering or restricting our understanding of Hartigan, these photographs illuminate aspects of her life that I, as an art history student, had not been fully aware of prior to studying her papers.

Grace Hartigan, born in 1922 in Newark, New Jersey, was an Abstract Expressionist artist in New York City, active primarily in the 1950s and 1960s. Her papers include photographs of the artist painting on canvas and spending time with friends on trips. As an art history student, I have studied and been fascinated with the art of the Abstract Expressionist movement for its dynamism, color palette, and artist personalities. However, the female artists identifying with the movement and their bright, mesmerizing works have remained my primary interest.

Recently, I was able to research the Grace Hartigan Papers for a patron, and found myself in awe of Hartigan's personal and professional letters and photographs. Her letters to dear friends and fellow renowned artists captured my attention through her casual writing style and her group of correspondents. Then, I noticed photographs of Hartigan painting dynamically and gracefully as well as photographs of her laughing with friends and playing games in parks. As art historians, we learn about, look at, and research different art movements, but by seeing the artists make the art that we study and their personal lives, we can relate to these artists on a closer level.

The first photograph (above) that strikes me portrays a young Hartigan painting an abstracted female figure in a room with foliage. Likely taken in the 1940s before her move to New York, Hartigan appears to be painting inside her studio or in her home with her materials. The combination of a peasant top and billowy skirt was Hartigan's primary uniform for painting in the early stages of her career. Even though she is associated with a dynamic and masculine art movement, this photograph renders herself, her space, and her art as gentle. Although it is unclear if this photograph is posed, this photograph was taken before her publicity images of the 1950s and 1960s when she was largely active in the Abstract Expressionist movement. This photograph serves to show an early glimpse of Hartigan's artistic style and how she could be rendered as an artist. She was only in her twenties here, and this action scene shows her creative process and early style as an emerging artist.

Grace Hartigan moved to New York City during the 1940s, and made a name for herself amongst the thriving New York art scene. She made friends with the most well-known Abstract Expressionists, including Helen Frankenthaler, Jackson Pollock, and Willem de Kooning, and through her papers here at the SCRC, we are able to better understand her relationships and exhibits. Hartigan often exhibited as George Hartigan instead of using her first name. Her paintings are mostly oil on canvas that primarily depict energetic, expressive lines and blocks of color and later paintings depict recognizable figures of specific men and women. 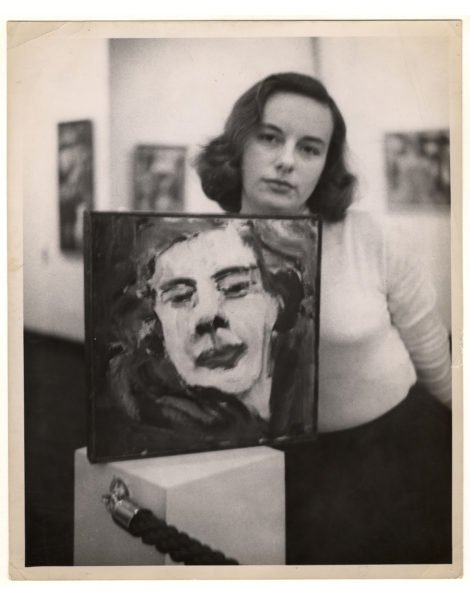 Grace Hartigan posing with her painting, Self Portrait in Fur, at a 1953 art show.

The second photograph (above) is a posed image of Hartigan with her work in 1953, likely taken by her boyfriend at the time, photographer Walter Silver. Silver took many of the professional and personal photographs that exist of Hartigan. Here, she stands alongside her self-portrait in a gallery setting in front of works on display. The painting in the foreground is titled Self Portrait in Fur, a very colorful piece in shades of blue, brown, yellow, and white, which is unfortunately lost with the black and white image, but one can imagine the hues based on the other bright and abstracted paintings in her oeuvre. This photograph was taken at an exhibit entirely of Hartigan's works, and by 1953, Grace began using her real first name to exhibit. As a publicity shot of Hartigan taken with one of her famous portraits in her exhibit space, this image provides some insight into art and commerce in the 1950s. Hartigan and other artists relied on and participated in the traditional art market in order to sell their works. Life magazine featured Hartigan and other female Abstract Expressionist artists in 1957, and Jackson Pollock earlier in 1949, and Hartigan was also featured in Newsweek in 1959. This image, along with the first, directly connects Hartigan with her works in different stages of creation and output.

A carefree Grace Hartigan flying a kite in the 1950s.

The third photograph (above) of Hartigan is my favorite. She is outside flying a kite in a park with other kite flyers. Her flailing arms and wide smile express her happiness in the moment. The smile on her face says it all. This kind of photograph is my favorite because it is relatable. You can look at this image and remember when you flew a kite or when you were in a park during the summer. If the image were in color, we would be able to see the green grass, the blue sky, the color of her top and skirt, and the kite.

The photographic materials in special collections serve as visual evidence of the real lives of people from the past that otherwise would not be revealed through words. With these three photographs, we get a glimpse of Hartigan’s professional and personal life, including precious memories with friends and Hartigan exhibiting her own work. The emotions, interactions, and relationships of artists shape their artistic output. We as viewers, students, and researchers can place ourselves in their footsteps, just like we can with Grace Hartigan flying a kite with her friends.