Miklós Rózsa (1907-1995), whose papers are held at SCRC, was a Hungarian-American composer known for his dramatic film scores. 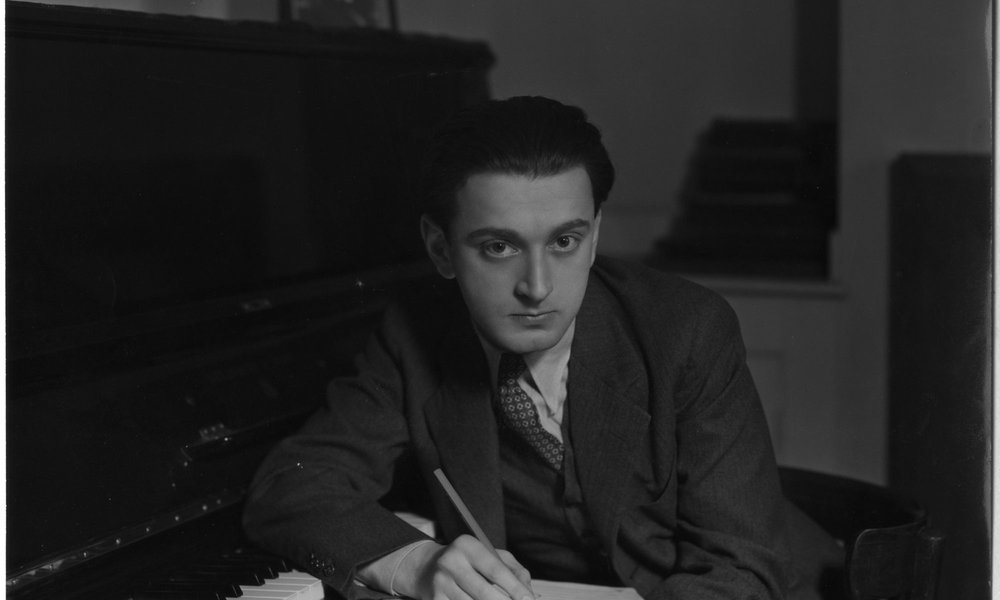 Miklós Rózsa (1907-1995), whose papers are held at SCRC, was a Hungarian-American composer known for his dramatic film scores. His career in Hollywood gained him tremendous fame: Rózsa received 17 Oscar nominations and won the award three times for his music for the films Spellbound (1945), A Double Life (1947) and Ben-Hur (1959). Rózsa was a brilliant, multi-Oscar-winning composer, but the only musical motif he wrote that became easily recognizable to the general public was not part of an award-winning composition. In fact, the motif is often not associated with Rózsa at all, since the more popular version is credited to another composer. 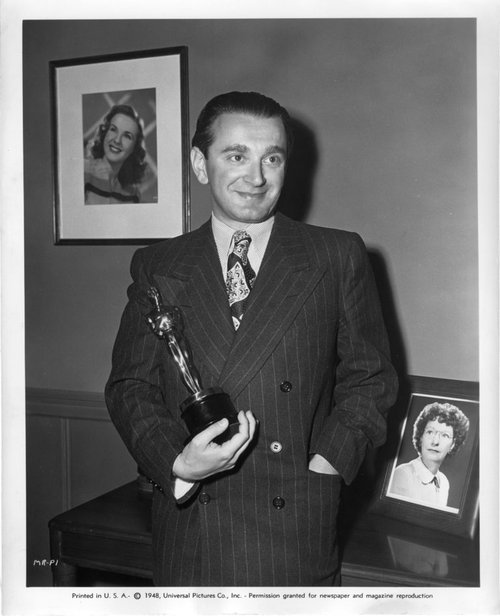 Miklos Rozsa holding his Oscar for the score of A Double Life in 1948, two years after The Killers was released. Miklos Rozsa Papers.

The famous four-note motif was originally composed by Rózsa for the 1946 American film noir, The Killers. In 1951, the same motif appeared in the “Main Title” theme music for the radio and television drama, Dragnet, composed by Walter Schumann. The music became the subject of a copyright lawsuit when Abeles & Bernstein, lawyers representing Robbins Music Corporation, the publishers of Rózsa’s score for The Killers, sent a cease and desist letter to Schumann’s publisher, Capitol Records Inc., on November 16th, 1953. When Schumann challenged this letter, Abeles & Bernstein informed Miklós Rózsa they would be filing for a copyright infringement on his behalf on January 4th, 1954 for Dragnet's “Main Title.” 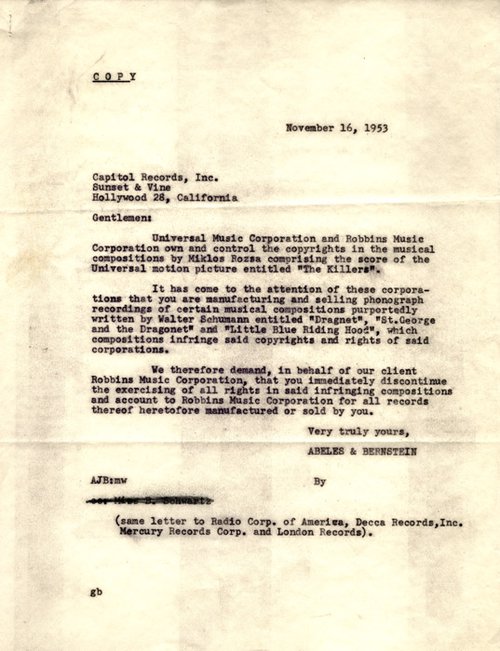 During music plagiarism lawsuits, lawyers try to establish that the second composer had an opportunity to hear the piece. In this case, Rózsa’s lawyers argued that Walter Schumann was on the sound stage during the recording of The Killers in 1946. A check procured by Universal Pictures placed Walter Schumann on the set during this time. This evidence was used to establish that Schumann had heard the melody and, consciously or unconsciously, copied the theme. It was at this point during the trial proceedings that Walter Schumann claimed that he received permission from Rózsa to use the motif. He argued that Rózsa gave him permission to use the motif which, with evidence, would be a strong defense against Rózsa’s claim. While the case was in session, the lawsuit and Schumann’s counter-suit received publicity from musicologists who pointed out that the four note theme can be found in several pieces throughout history. 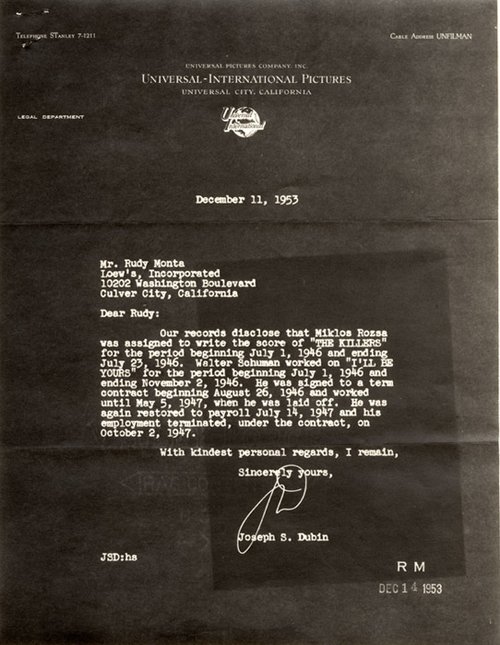 A letter from 1953 that establishes that Schumann was on the payroll for Universal Pictures during the recording of “The Killers” in 1946. Miklos Rozsa Papers.

Although Rózsa and Schumann’s lawyers argued for their clients on the basis of copyright law, this was not the only factor in the ongoing court case. By the time the lawsuit was filed in 1954, Schumann’s theme for Dragnet had already exploded as a household gimmick. Dragnet began airing television episodes in 1951, but two wildly popular versions of the show’s theme music were released in 1953. First, Ray Anthony’s jazz orchestra rendition debuted in June 1953. Stan Freberg’s parody single, “St. George and the Dragonet” (“Little Blue Riding Hood” was on the B-side) came out in October 1953. Both versions sold well and landed high on Billboard’s charts.

The four note motif became a widely popular theme by the mid-1950s—it was the score’s most memorable effect. People would have hummed the tune for comic effect in everyday life. In becoming an introductory device for one of the most popular television shows of the decade, the motif became distorted beyond Rózsa’s original thematic indication that the “killers” were present in the 1946 movie.

In 1953, after Anthony’s jazz rendition and “St. George and the Dragonet” were released, journalist Bob Thomas published an article on the craze revolving around the four note theme:

“The opening theme of ‘Dragnet,’ the cops-and-hoodlums TV show on NBC, has become the most famous four notes in America today. They have eclipsed “Dum da dum dum”— the start of Beethoven’s Fifth Symphony that was the victory symbol in World War II.” Bob Thomas, “Four Notes Blare for ‘Dragnet'”

Rózsa must have been aware of the other versions of the song, as the cease and desist letter sent by Abeles and Bernstein in November 1953 directly references “St. George and the Dragonet” and “Little Blue Riding Hood,” which were produced under Capitol Records, the same label as Dragnet. The popularity of the other versions of the song demonstrated both the success of the theme, and the possible monetary value of the work if it could be proved to be solely Rózsa’s composition. 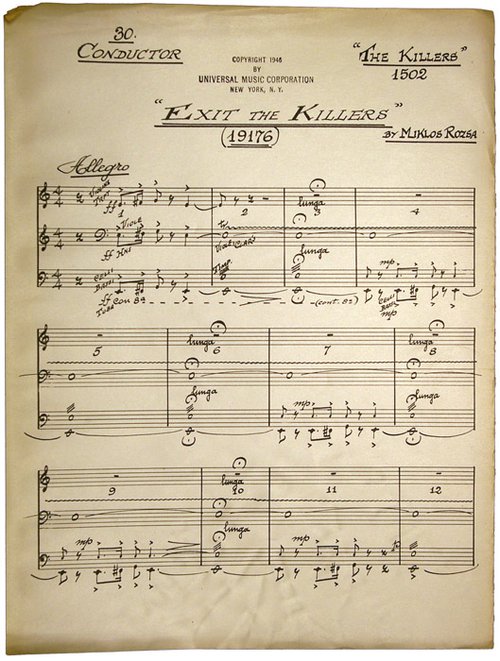 A page of Miklos Rozsa’s compositions for The Killers featuring the famous four-note theme in the first two bars of music. Miklos Rozsa Papers.

In 1955, a settlement between the two publishers concluded the case by allowing both Rózsa and Schumann and their publishers to share the royalties for the four note theme “Main Title,” which was later titled “Danger Ahead.” The “Dragnet March,” which was everything other than the four note theme, remained the intellectual property of Walter Schumann. It took several years for the decision to be enforced, made evident on CDs published after 1955 that list either Walter Schumann or Miklós Rózsa as the composer— but not both.

Music copyright lawsuits tend to be intense legal battles between composers and artists. My copyright class, an elective for my Library and Information Science master’s degree, has taught me new ways to interpret copyright lawsuits. So, how does Rózsa’s case relate to modern musical copyright cases? Most recently, Katy Perry won an appeal against the Christian rapper Flame in a controversial lawsuit claiming Perry’s song “Dark Horse” infringed on an eight-note ostinato, a musical pattern repeated many times in succession, in Flame’s song “Joyful Noise.” Similar to Rózsa’s case, rapper Flame attempted to prove Perry had unconsciously copied the ostinato after having reasonable access to the song. However, by granting Perry’s appeal, the court “upended the long-standing copyright precedent regarding the extent to which access to a song can be used to prove infringement or plagiarism.” The cases of  Miklós Rózsa and Walter Schumann and Katy Perry v. Flame are reflective of the constantly evolving nature of music and copyright law. Maybe in another 60 years, we will be comparing the groundbreaking case involving Katy Perry with a new and more influential musical controversy. Time will tell!