In the Beginning of the Year and When it Ends: Memorials to Pan Am Flight 103

December 21 will mark the 32nd anniversary of the bombing of Pan Am Flight 103 over Lockerbie, Scotland that killed 270 individuals from 21 countries. 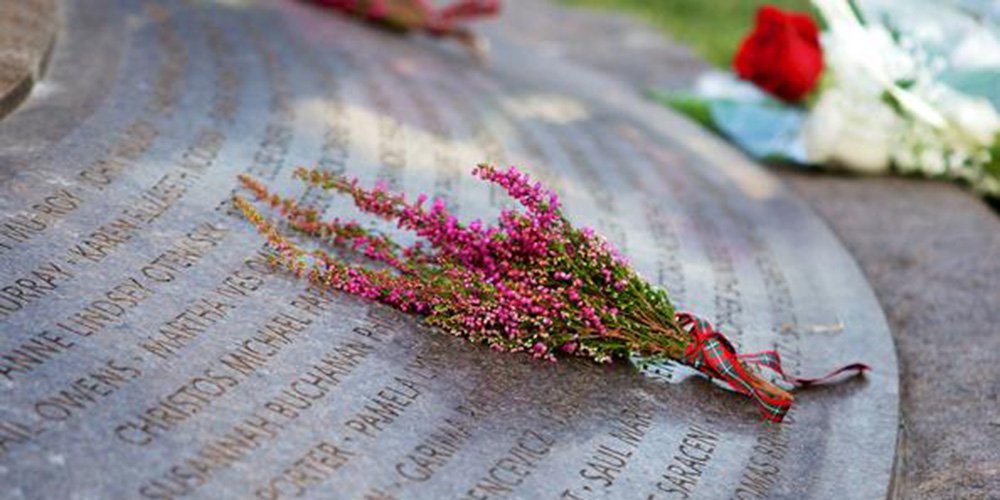 This December 21 will mark the 32nd anniversary of the bombing of Pan Am Flight 103 over Lockerbie, Scotland that killed 270 individuals from 21 countries. Among those whose lives were lost were 35 students returning from a semester abroad in London, England and Florence, Italy with Syracuse University’s Division of International Programs Abroad (now Syracuse Abroad). Each year on the anniversary, the communities that suffered this loss come together to remember, to grieve, and to continue to heal.

The lives of those lost as a result of the bombing have been commemorated in physical spaces across the world. Some are quiet places of solitary contemplation, while others stand amid hectic daily life. Annual memorial services are held each year in Lockerbie, at Syracuse University, and at Arlington National Cemetery at three of the largest and most public memorial spaces dedicated to the disaster. The Pan Am Flight 103/Lockerbie Air Disaster Archives at the Special Collections Research Center is honored to hold collections and materials documenting the creation and use of these memorials.

On the one-year anniversary of the disaster, 21 December 1989, the Garden of Remembrance at Dryfesdale Cemetery was officially dedicated. A symbolic interment for the 17 unidentified victims was also held in this space earlier that year. Consisting of a garden and memorial wall bearing the names of all 270 victims, the Garden of Remembrance has since grown to include plaques dedicated to individual victims by their loved ones. The memorial stone wall was erected with the assistance of the Lockerbie Air Disaster Trust. In June 1990, the re-dedication of the Dryfesdale Cemetery Lodge, now the Remembrance Room, created a space of quiet reflection for those who travel to Lockerbie to pay their respects. 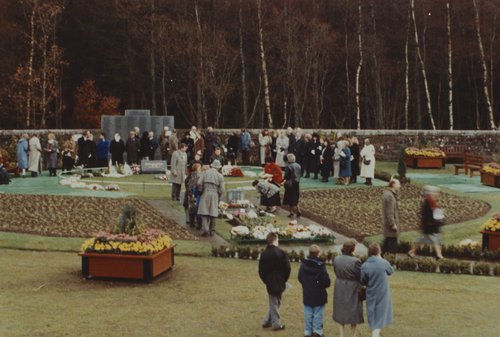 Dedication of the Garden of Remembrance in Lockerbie, Scotland on 21 December 1989. Richard Paul Monetti Family Papers. 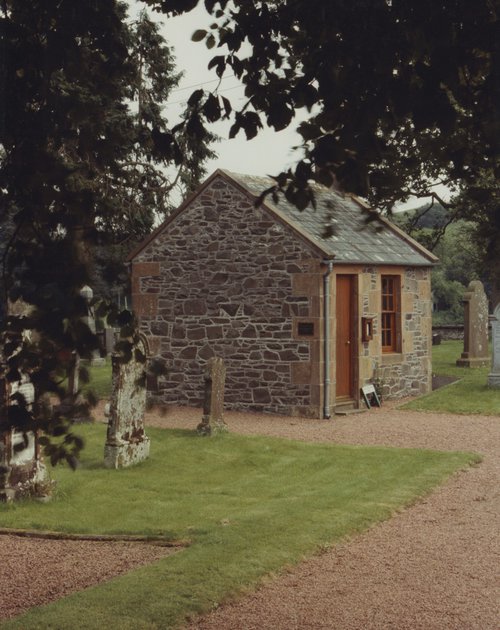 Senate Joint Resolution 129 designating Arlington National Cemetery as the site for the Lockerbie Cairn was unanimously approved by Congress and signed into law by President Bill Clinton in November 1993, following the extensive efforts of the American families of the victims. The Cairn, a traditional Scottish symbol of remembrance, was a gift from the people of Scotland to the people of the United States. It is constructed of 270 red sandstone blocks mined from the Corsehill Quarry in Dumfriesshire, Scotland, the same quarry from which the base stones of the Statue of Liberty were mined. The names of each of the victims are engraved on the structure’s granite base. The original design for the Cairn was completed by Lockerbie resident Donald T. Bogie. The families of the victims were involved with all aspects of the planning and construction of the Cairn. Deirdre Fortune, wife of victim Robert Fortune, served on the Cairn Committee of the Victims of Pan Am Flight 103, Inc. and was instrumental in commissioning and preparing reports, designs, and proposals for various government agencies. She further served on the Dedication Subcommittee responsible for coordinating the dedication of the Cairn by President Clinton in 1995. The principle mason involved in the Cairn’s construction was Frank Klein, father of victim Patricia Klein. The bronze dedication plaque affixed to the side of the Cairn was designed by sculptor J. Clayton Bright, brother of victim Nicholas Bright. An annual memorial service coordinated by the Victims of Pan Am Flight 103, Inc., the largest US-based victims and families group, is held at the Cairn on December 21. 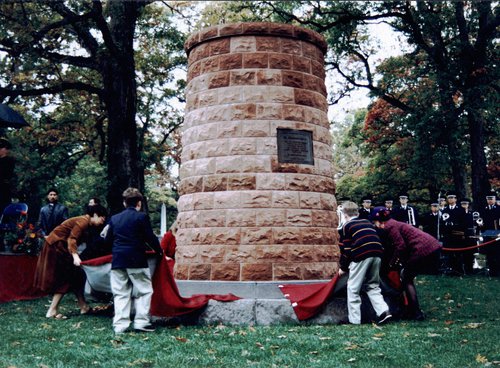 Family members of the victims of the Pan Am Flight 103 bombing unveil the inscribed base of the Lockerbie Memorial Cairn at the 3 November 1995 dedication ceremony. Thomas Britton Schultz Family Papers. 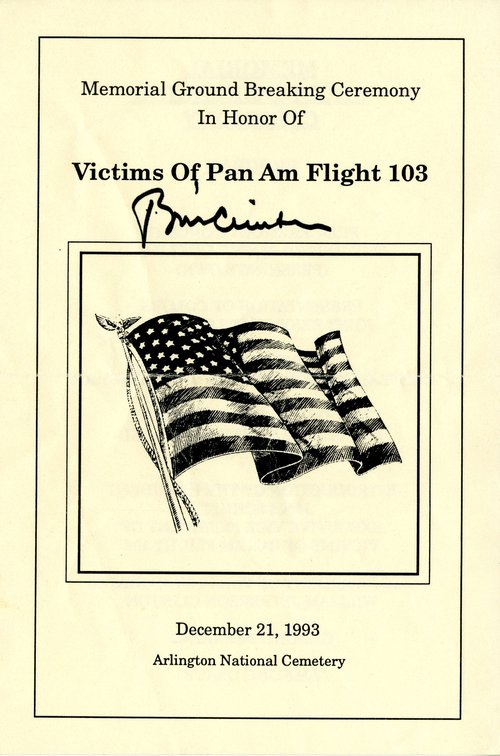 Dedicated on 22 April 1990, the Place of Remembrance is Syracuse University’s permanent physical memorial to the victims of the disaster. The monument consists of a semi-circular granite and limestone wall engraved with the names of the University’s 35 study abroad students who perished in the bombing. The site also includes a Remembrance Garden and a circular granite bench bearing the names of Clay, New York residents Paula and Glenn Bouckley who were among the victims of the disaster. At the suggestion of the students’ families, the inscription on the wall was amended shortly after the dedication to include the phrase “caused by a terrorist bomb.” Located directly in front of the Hall of Languages and behind the main gateway to campus, the Place of Remembrance is a prominent feature of the campus environment.

The dedication of the Place of Remembrance was attended by families of the 35 Syracuse University study abroad students, faculty, staff, students, alumni, and community members. “The Gates of Prayer” by Ceil Buonocore, printed in the dedication program seen here, was used as a responsive reading during the ceremony. “This marvelous place, at once a most mundane center, a functional portal of our daily comings and goings, is now pledged as well to stand as an honored symbol of the spirit of [g]ateway and of [p]assage,” Ronald R. Cavanagh, Vice President of Undergraduate Studies, remarked. “Not a place apart, obscure or aloof and avoidable. But an undeniable, almost irresistible conduit of our collective energies. A place at the heart of our [w]elcomes and [f]arewells.” A Rose-Laying Ceremony coordinated by the Remembrance and Lockerbie Scholars program as part of Remembrance Week and an annual memorial service organized by Hendricks Chapel are held at the site annually. 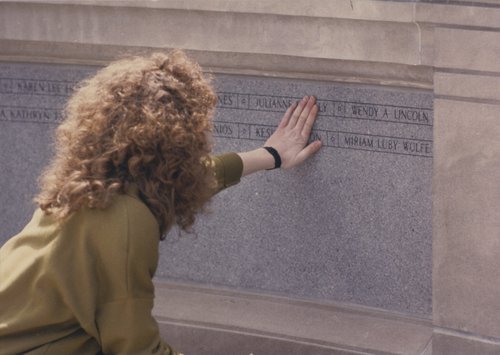 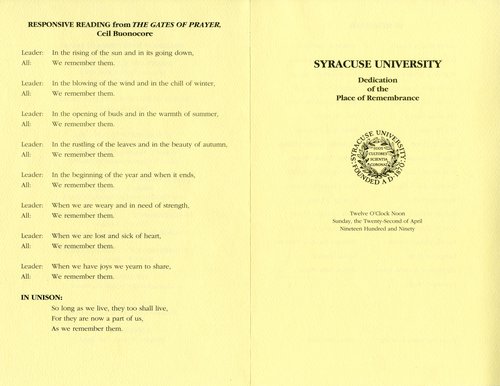 While a dedicated space or place can often be  part of the tradition of how we remember those we have lost, there are also the small remembrances we practice every day. In silence, in song, in thought, or in prayer. In solitude or with others.  Although the communities impacted by the Pan Am 103 tragedy won’t be able to come together in person this year due to the ongoing COVID-19 pandemic, December 21 will always be a day of reflection and remembrance. All are invited to join with the Archives and University community in the spirit of remembrance during the Hendricks Chapel annual memorial service, which will be held virtually this year on Monday, December 21 at 2:03 p.m. EST. Further information and registration details will be made available at Remembrance.syr.edu in the coming days.