Sometimes after reading a long, captivating book, I feel the need to take a moment to let the story and its conclusion settle in my soul before I can move on to reading something new. The same was true for reading and transcribing letters from the Marcel Breuer Digital Archive. The Breuer Papers are housed at SCRC where I have been interning, assisting with the German correspondence transcriptions from the collection. Breuer grew up in Hungary but he studied in Germany’s Bauhaus school as a young man and lived and worked in Germany after his studies, which is why a significant portion of his early correspondence is in German. Although I read and speak German proficiently (my German in-laws may disagree), reading and transcribing the Marcel Breuer letters brought out a few unexpected challenges, as well as a few unexpected joys.

When I first began working on the project, I dove right in: I opened the spreadsheet that contained a list of all of the handwritten digitized Breuer letters, and found the first one that was in German. This first one was, let us say, hard to read when I first opened it. After opening a few of the letters, a slight sense of panic started to set in as I thought, “Wow, I cannot read these – there are too many squiggly lines!” To ease my panic, I closed the spreadsheet and began reading about German script, and attempted to familiarize myself with some of the stylistic variations, and even printed out a few German alphabet sheets that I could use as a guide when I needed to (“Is this an N, an M, or a U?”).

A handwritten digitized Breuer letter in German that proved hard to read when I first opened it. Marcel Breuer Papers.

After giving myself a good pep-talk, I decided that instead of starting with letters that were difficult for me to read, I should find an author whose penmanship was more legible and then ease myself into the more difficult letters. So, instead of simply going down the list of German letters listed in the Breuer Transcripts Tracking Spreadsheet in order, I decided to focus on one author and recipient at a time, so as to fully immerse myself in their handwriting and writing style. This author/recipient focused method also helped if there was a word or a letter that I couldn’t quite make out (“Does this word start with a P, a B, or a D?”), because I could take a screenshot of the troublesome word, and drag it around the letter (or other letters) until I found a recognizable match. In cases where there were many letters to go through by a particular author, I would sometimes create a word “key” as a reference for common stylistic variations. Focusing on one author at a time also allowed me to do some brief background reading on them, so the vision that I had of them grew more complete, and I was better able to contextualize the person within a specific time and within relation to Breuer. 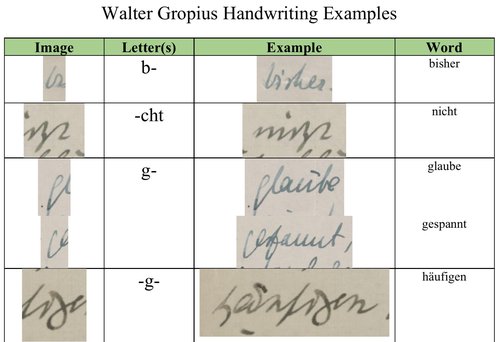 A word “key” I created as a reference for common stylistic variations.

After I decided upon which author I would focus, I would sit down to begin transcribing their letters. I always had the same set of windows open on my computer:

The various “tools”, or windows, I kept open on my computer during the transcription process. 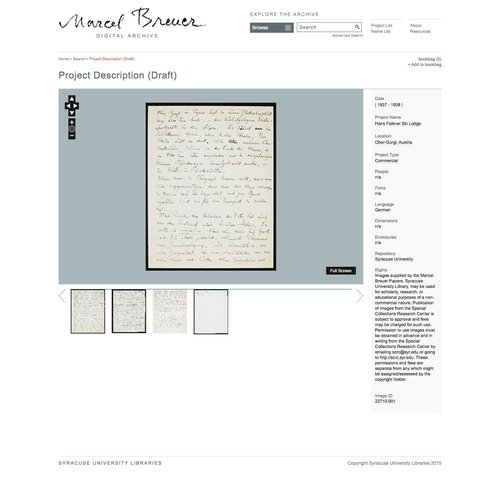 One of the thousands of pieces of correspondence digitized on the Breuer website. Marcel Breuer Papers.

As soon as I have all of my “tools” open and ready, I begin the transcription: I write down the Object ID and the associated Item IDs in my TextEdit document, and then transcribe the letter verbatim. To indicate letterheads, drawings, doodles, images, or anything that is non-textual, I use [square brackets], and try to describe what I see as accurately, shortly, and uniformly as possible. Sometimes, describing these things can be a bit wonky, which is why I, luckily, have my advisor, Michele Combs, to ask for help. 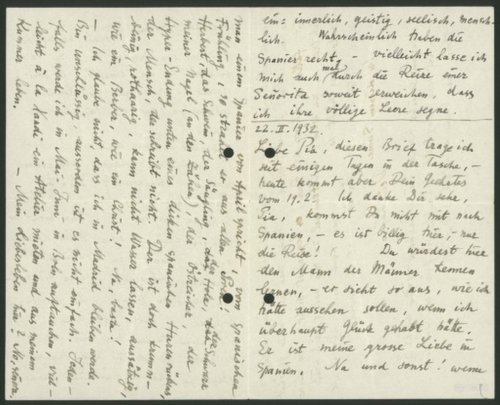 An example of one of the digitized Breuer letters I transcribed. Marcel Breuer Papers.

The number of pieces of correspondence connected to an author and recipient vary. Sometimes, there are just a handful, sometimes, there are dozens, and in the case of some of Breuer’s most illustrious friendships and partnerships (i.e. Walter Gropius), there are hundreds of letters (albeit not all handwritten, and not all in German). The funny thing about the author and recipient focused method I chose for transcribing, is that as I am working my way through a series of letters, I begin to develop an almost voyeuristic relationship with the author and recipient. The letters in the Breuer collection can reveal the expected – discussions of business deals, and projects, and money, and buildings – but they reveal so much more, too. 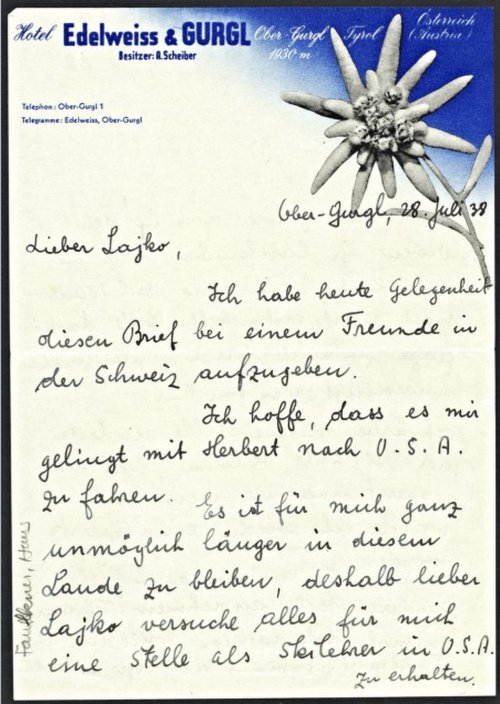 One of the letters I transcribed for the Breuer project. Marcel Breuer Papers.

The letters can reveal courtships, burgeoning friendships, jokes, pleas for help, admissions of loneliness, love, lust, and even occasionally the nonsensical ramblings of a poor architect when he is a bit in his cups. When I come to the end of a chain of correspondence and I have submitted my final transcription connected to that person, there is a certain sense of loss, a sadness that I will no longer be participating in this story into which I have stumbled. I sometimes find myself regretting that all the letters are not extant, and when months or years would pass by without correspondence, it felt like I was missing out on something. I wonder what happened to the writers or the recipients of the letters. What paths did their lives take? What conclusions were reached?

You begin, then you are immersed, then it is over, and it is time to move on to the next letter. Much like reading a book, the stories that are told through these letters can captivate your heart and imagination and extend their tendrils far beyond their physical (or in this case, digital) boundaries. Sometimes, when the weight of the contents of a long chain of letters linger in my fingertips, I feel the need to do a few “palate cleanser” transcriptions before I dive in to the next “saga”, and I will transcribe the letters of an author with only a few letters connected to their name. Unlike a book, however, there is no “last page” to the letters, because there is always something new to explore. Yes, I may work my way through all of the handwritten German letters during this internship, but the Breuer collection contains over 49,000 pieces of correspondence: an almost limitless story in which to become immersed.

I didn’t know too much about Marcel Breuer before I started this internship (“He’s the chair guy, right?”), and to be fair, I still don’t know too much about him: He lived from 1902 until 1981, and most of the letters I have worked with so far have been concentrated between the mid-1920s to the mid-1930s. But reading letters that were written to him alongside Breuer’s own (sometimes Hungarian-tinged) German has given me an oddly unique and personal glimpse into the early life of this man: A man who is exploring the world, discovering and losing love, dreaming, experiencing triumphs and failures, showing grace and vanity, probably drinking too much, and altogether, revealing himself to be – like all of us – a perfectly imperfect human being. I look forward to learning more about the man through his letters, and now that I look back at those first letters I tried to work on, I don’t just see squiggly lines, I see the beginning of another story.