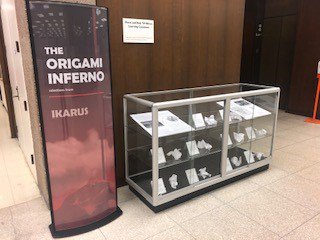 The youngest member of a loose-knit group of artists working in post-war Lower Manhattan, Ikarus has been a fixture in the NYC art scene for over six decades. Stylistically his work displays characteristics of both Pop and Abstract art, working in a style he has dubbed Post-Post Conceptualism. Other artists in this genre include performance artist Suzi Bennet and the minimalist poet Chad. Their 1974 collaborative film Three Artists Screaming Obscenities at People Watching the Film Planet of the Apes in a Crowded Matinee is considered a tour de force in outré filmmaking. Their subsequent film Three Artists Filming People Prematurely Leaving a Crowded Matinee (1975) should not be missed.

With his latest series Origami Inferno Ikarus explores the movement of a hypothetical soul as it traverses various states of being. Using Dante Alighieri's Divine Comedy as inspiration Ikarus weaves the poet’s allegorical circles of hell into a stark narrative, encapsulating the hubris of man, in the process bringing our vices and shortcomings into sharp focus. Embroiled in their eternal suffering the damned are given eternity to reflect upon their sins; Ikarus’ personal suffering – one which must surely equal the pain experienced by the denizens of that dark realm – is laid before the viewer, a gift.

His sculptures may at first glance appear deceptively simple in construction. The artist has stated that each work takes several weeks to execute, created through a complex system of rearrangement of surface. “The way the internal shadows play off each other is key. I only work within a very narrow space time each day, when the natural light is just so. Once special relationships are established their meaning is ‘locked’ and display in spaces such as a gallery setting are then possible.”

The architectural folds serve merely as a lattice. The infusion of meaning must be transferred into the paper itself through a process of concentration wherein sin-energy flows from body into the near-microscopic fibers of paper, infusing and filling the twisted tableau rosa with the artist’s potent psychic toxins. Planes in the once two-dimensional sheet are carefully arranged to trap this energy in what the artist calls a perpetual mind battery. Subtle offgassing from the sculptures can be safely experienced by prolonged commune with the artifact. A certain Duchampian spirit of chance is at play. The experiential sluice from Origami Inferno forms the basis for Ikarus’ upcoming MOMA installation Room Filled with 181,317 Pieces of Paper. On the subject of Duchamp the artist states that “his genius was the ability to recontextualize the mundane – say a urinal – and by doing so force a paradigm shift. But what happens when you unrecontextualize an object charged thus? I do not advise attempting to do this at a Duchamp exhibition.”

Despite a high-profile career and associations with seminal artists such as Warhol, the true identity of Ikarus remains a mystery. In a 2007 interview, the artist stated that “my identity is unimportant. Like my namesake, I make it a habit in soaring upward towards truth, gaining enlightenment through the creative process. Unlike the Icarus of old however, my wings are built of sterner stuff, my resolve and raw talent have yet to fail me.” Notoriously opposed to photography and its soul-stealing properties, Ikarus gained the nickname ‘Old Camera Puncher’ after a series of nightclub brawls. One well-documented incident involved a scuff with Andy Warhol, the latter’s wig ending up in Liza Minnelli’s plate of potato salad, now immortalized in the upcoming film I Shot Andy Warhol’s Wig into Liza Minelli’s Potato Salad (2022) starring Nicolas Cage as Warhol. Suffice it to say that photographs of Ikarus are nearly impossible to find, and his true identity shrouded in mystery.

This exhibit consists of ten representative works from his thirty-seven-part series, annotated with explanatory notes by the artist. 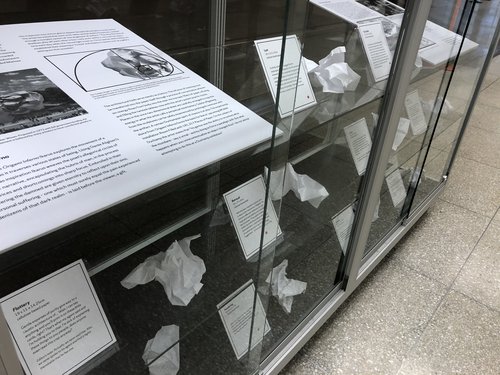 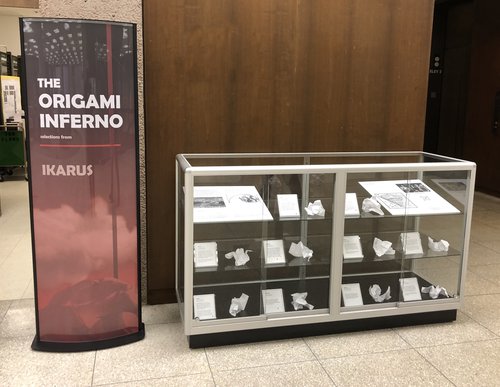 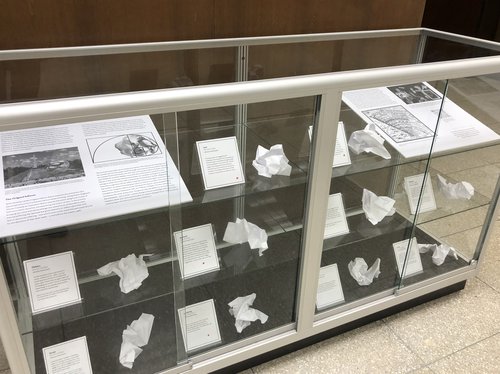