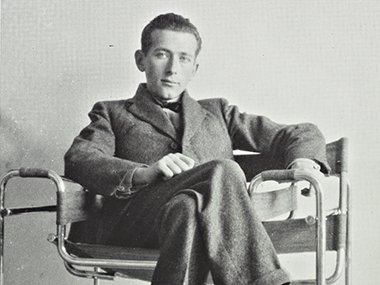 In the late 19th and early 20th centuries, architects in Europe and America struggled to design buildings suitable for modern, industrial society. They experimented with new materials such as steel and concrete and developed new building typologies like the skyscraper. The heart of the SCRC's architecture collection consists of the papers of a number of European-born architects who immigrated to the United States in the 1920s and 1930s, most notably Pietro Belluschi, Marcel Breuer, and William Lescaze. These men helped to define mid-century American modernism through buildings such as the Pennsylvania Savings Fund Society Building, the Pan Am building, and the Whitney Museum. On a smaller but no less important scale, industrial designers strove to give modern form to everyday objects ranging from cameras to kitchen mixers. The papers of important industrial designers such as Russel Wright and Walter Dorwin Teague are complemented by those for professional organizations like the Industrial Designers Society of America.

The Marcel Breuer Digital Archive represents a collaborative effort headed by Syracuse University Libraries to digitize over 30,000 drawings, photographs, letters and other materials related to the career of Marcel Breuer, one of the most influential architects and furniture designers of the twentieth century.

Many of the architecture and industrial design collections contain visual materials. In particular, see:

The collection includes significant theoretical texts in the history of architecture ranging from Renaissance treatises like Leon Battista Alberti's De re aedificatoria (On the Art of Building) and Palladio's I quattro libri dell'architettura (Four Books on Architecture) to 19th- and 20th- century works such as William Morris's lecture to the Arts and Crafts Exhibition Society entitled "Gothic Architecture" and the 1910 Wasmuth Portfolio, which introduced European architects to the work of Frank Lloyd Wright. SCRC also possesses a full run of Gustav Stickley's magazine the Craftsman and a partial run of Ernst May's journal Das neue Frankfurt.