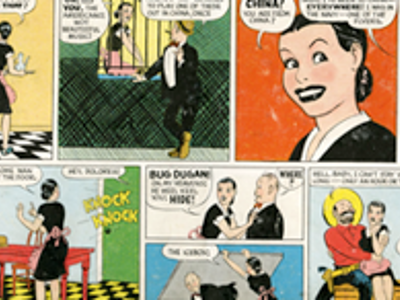 Home to over 200 manuscript collections consisting primarily of original artwork used for daily comic strips and editorial cartoons. In addition to printed materials that document particular cartoon titles, we hold a few collections of sports cartoons and magazine cartoons, as well as histories of cartooning and cartoonists.

Popular favorites such as Bud Fisher's Mutt and Jeff, Mort Walker's Beetle Bailey, and Bil Keane's Family Circus are represented in our holdings, along with sequential continuity (soap opera) strips such as George Wunder's Terry and the Pirates and Paul Norris's science fiction strip Brick Bradford. Some collections contain correspondence with fans, political figures, and other cartoonists, while others contain printing proofs and other primary source materials. Our editorial cartoon collections feature the work of Pulitzer Prize-winning cartoonists and artwork from newspapers across the United States. These collections enable the investigation of particular themes and eras such as the Cold War, the Vietnam War, and the Civil Rights Movement. SCRC's holdings are especially strong in works from the 1950s and the 1960s; however, examples of late-nineteenth-century cartoons and early comic strips are also available for research.

Many of the cartoon collections include audio and visual materials. In particular, see:

Printed materials related to the history of cartooning feature periodicals, contemporary and period compilations of particular strips or cartoonists, and histories of cartooning. Periodicals available for research include Cartoonist Profiles, the newsletters of the National Cartoonists Society, and limited runs of Inklings and Cartoonews. In addition, representative holdings related to underground comics include Robert Crumb's Zap Comix, Gothic Blimp Works, and a small collection of "Tijuana Bibles." Researchers may also be interested in volumes of Shadow Comics, produced by Street and Smith in the 1940s.