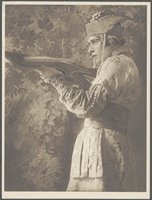 In conjunction with this year’s Syracuse Symposium and its theme of “migration”, the Special Collections Research Center presents a fall exhibition titled “Dawn of a New Age: The Immigrant Contribution to the Arts in America.” "Dawn of a New Age" tells the story of five artists who immigrated to the United States during the first half of the 20th century: Adolph Bolm, a Russian dancer and choreographer who performed with the Mariinsky Ballet and Ballets Russes; William Lescaze, a Swiss architect who was one of the pioneers of modernism; Louis Lozowick, a Russian printmaker known for his Art Deco and Precision lithographs; Miklós Rózsa, a Hungarian composer of more than 100 film scores, including "Ben Hur"; and John Vassos, a Greek illustrator and industrial designer. The exhibition draws from the rich holdings of SCRC and showcases more than 50 of the artists' personal papers, manuscripts, photos and artifacts.