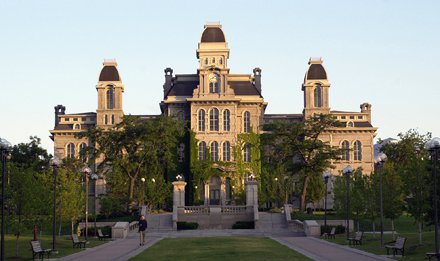 Contractors: Randall and Nesdal, stone masons who had a stone yard on S. Salina Street, Syracuse

Notes: This was the first building built on campus. Prior to its construction classes were held in the Myers Block on E. Genesee and Montgomery Streets in downtown Syracuse. The building was primarily an H-shape with recesses in the front and rear walls on either side of the central section. The rear recesses were partially occupied by coal houses. The east and west towers were part of the original construction; the central tower was not added until 1886. The east and west towers held large water tanks capable, it was believed, of flooding the entire structure in the event of fire. The west tower also held a 600 pound bell. The building originally rose 3½ stories in the central section and 2½ stories in the wings and was topped by a slate-covered mansard roof. Molded metal cornices sported stone brackets and the exterior walls had a "pecked" finish. The building was the home of the College of Liberal Arts from its beginning, although other schools and departments have also occupied the edifice, including the Registrar and the Chancellor. A section of the eastern wing is said to have been used as a natural science museum.

During the 1979 renovation very few alterations were made to the exterior. Glass-enclosed vestibules were added to the rear of the building and the lowering of the first floor to grade for the addition of an elevator revealed the building's stone foundation. A new central stairway housed in a five-story atrium. Five concrete floors were inserted where there had been four of wood. The old floors were removed and the original timber columns replaced with steel. Wood timbers, however, were retained in the mansard roof.