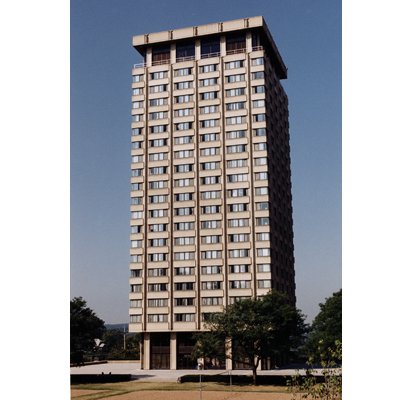 Architect: King and King of Syracuse

Notes: Originally constructed as a men's dormitory, it is one of the largest residences on campus with approximately 600 students. When built, it was the second-tallest building in Syracuse and the largest reinforced concrete structure in New York State. The 21st floor boasted a penthouse lounge and private dining room. The building had 2 floors underground for parking and included a main lounge, library, and a lounge on each floor. It connected via an underground tunnel to Sadler Hall.

While Ronald Lawrinson did not attend SU, he was, according to Chancellor Tolley, a "… friend and benefactor of SU, who [was] particularly interested in higher education …".