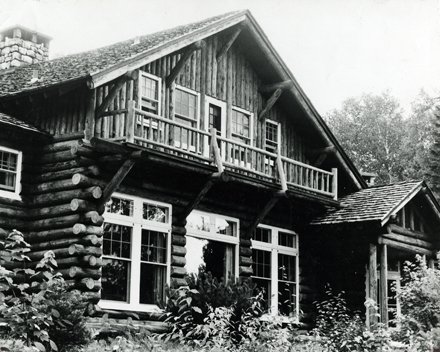 Notes: The original hunting lodge was part of Durant's Forest Park and Land Company and included several service buildings on the property. Acquired by businessman Stewart Hollingshead after Durant's 1904 bankruptcy, by 1944 it was used by the R.M. Hollingshead Corporation as an executive retreat. In 1946 an airplane hangar was built to accommodate the company's float planes. A submerged ramp connected directly to the building. Destroyed by fire in 1947, the lodge was rebuilt in 1949. Designed with a two-story central portion and two wings, it contained five bedrooms, a dining hall seating 66, a large pine-paneled living room with flagstone flooring and stone fireplace. The library of the new lodge was paneled in mahogany taken from a Philadelphia townhouse. Bar walls were sheathed in weathered boards taken from an 80 year-old barn near Saranac Lake. Other buildings on the property, including the hangar and the boathouse, were not touched by the fire. To accommodate construction crews, a guest house was built with an attached greenhouse. Nearby were an icehouse and a ten-sided open frame woodshed.