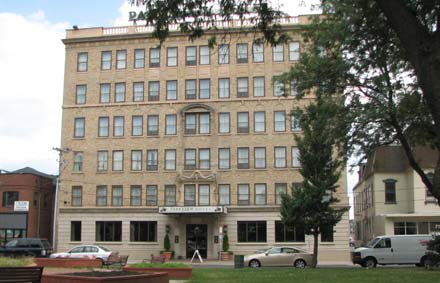 Notes: Originally built as the Medical Arts Building under the management of Louis Shopiro, the building contained 50 suites for doctors and dentists, two elevators - one of which was large enough to fit a stretcher - and was touted as "modern in every detail." In 1981, owner Norman Swanson renovated the building as the Executive Quarters with apartments in the top three floors and one wing rented exclusively to Syracuse Stage to house actors. In 2011, three floors of the Parkview Hotel became a housing option for SU students, with the Housing Office giving preference to drama and design students. Study lounge and fitness centers were also provided for the students.