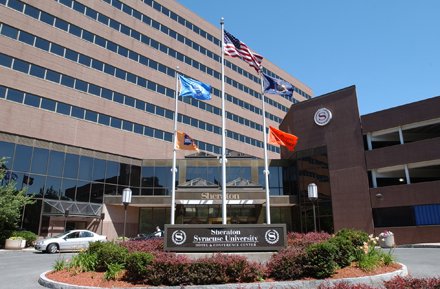 Plans Presented to Board of Trustees: August 6, 1982

Notes: Plans were first unveiled to build a hotel and conference center adjacent to the University in 1981. The 1.75 acre site, owned by the University, was leased to the development firm in 1982, and plans were presented to the Board of Trustees that August. Originally called the Sheraton University Inn & Conference Center, it opened in January 1985.

The Hotel rests on a 1.75 acre site and consists of a nine-story hotel, conference center, and attached parking garage. The first floor contains a lobby, lounges, dining areas, shops, and an enclosed pool. The conference center is on the second floor of the building, with guest rooms located above. The Center also contains a 70-seat amphitheater.

In 2011, the Hotel underwent extensive renovations to guest rooms, the fitness center, club lounge, front desk and restaurants at a cost of approximately $3.5 million.