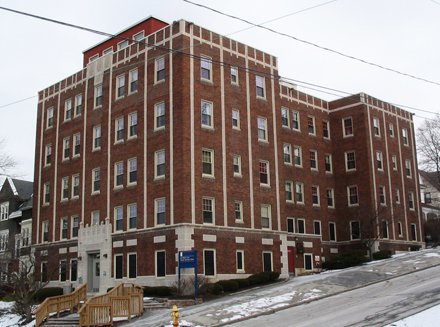 Space: Five stories, originally built as 33 apartments, by 2010 housed 64 students in suite-style rooms with full kitchens on each floor

Notes: Opened in 1928 as the "most exclusive apartment in Syracuse", Washington Arms boasted large kitchens, plenty of closets, gumwood doors and trim, tiled baths and storage lockers in the basement; it claimed to be the quietest apartment in the city as "extreme care [was] used to deaden each apartment from its neighbor." SU purchased the building in 1943 to house Army Air Corpsmen, with the goal of creating a women's residence hall after World War II ended. However, because of housing shortages caused by the war, SU moved the soldiers to other quarters and made the apartments available for civilian rentals. 1946 saw nursing students living in the apartments and by 1950 it had become a women's dormitory. Renovated in 1978, it underwent a "building renewal" in 2002.