An Incomplete History of the Inn Complete

Even though the Inn Complete has only been in this location since the 1990’s (it was originally located in the Sky Barn), the structure has had a storied life over the last 100 years. 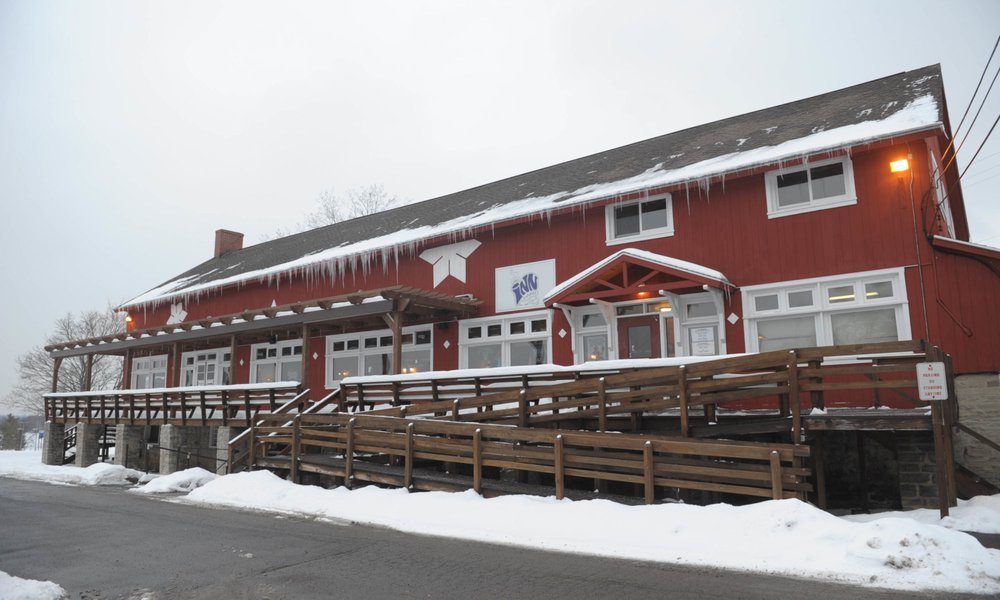 In my work as a Reference Assistant at SCRC, I answer a lot of reference questions about University history. This was especially true last year as everyone was preparing for SU’s sesquicentennial this spring. One of my favorite projects from sesquicentennial preparations was researching the Inn Complete and the history of its current building on South Campus. Even though the Inn Complete has only been in this location since the 1990’s (it was originally located in the Sky Barn), the structure has had a storied life over the last 100 years.

The building was originally constructed as a barn on the University Farm, which was a 100 acre farm when Syracuse University acquired it in 1910. 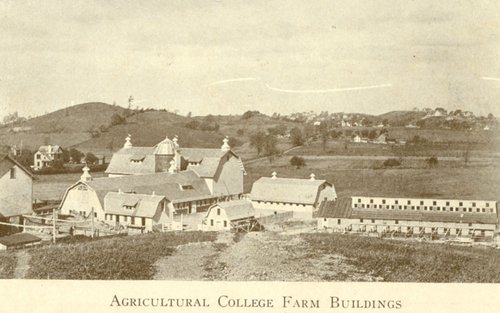 View of the University Farm and the College of Agriculture. Syracuse University Photograph Collection.

It’s unclear if the Inn Complete barn was one of the structures from the original farm or was added around 1913 when Mrs. Russel Sage, the wife of an SU alumnus,  donated funds to construct new barns on the University Farm. In either case, the building is one of the oldest on South Campus. 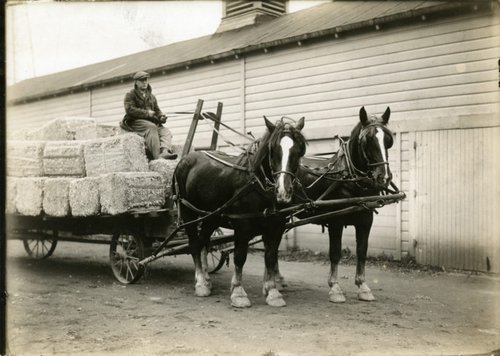 The farm remained fully operational in partnership with the College of Agriculture until the college closed in 1934. The farm continued to operate in a limited capacity until the influx of students after World War II necessitated that the land be used for additional student housing. 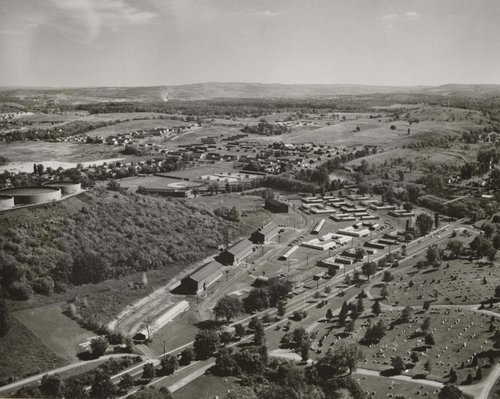 In 1947, the barn was renovated into a Ski Lodge which supported SU’s very own ski slopes, skating rink, and other outdoor winter activities on South Campus. 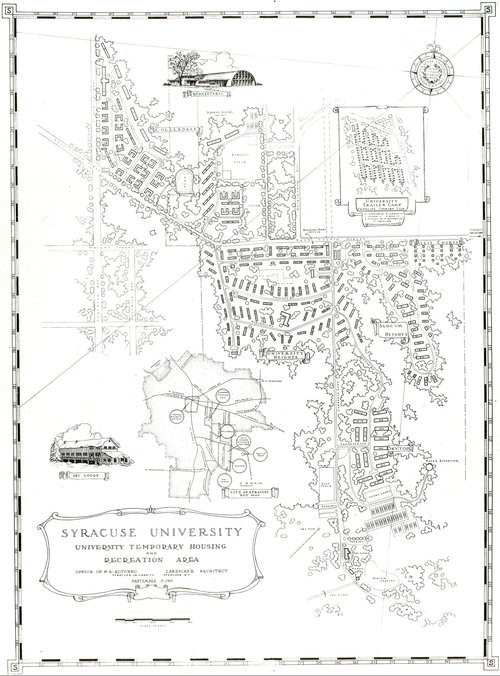 Map of the temporary housing and recreation area on South Campus, September 8, 1949. The Ski Lodge and accompanying outdoor facilities can be seen in the bottom left corner of the map. Syracuse University Photograph Collection. 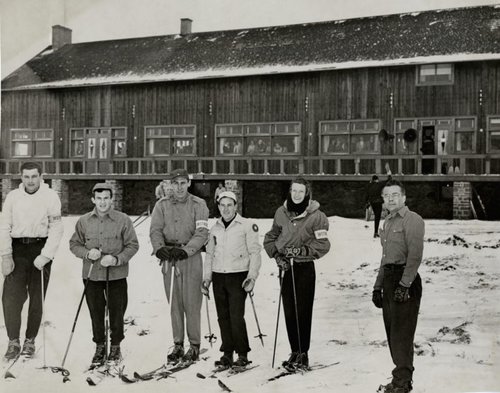 The renovations added picture windows and a stone porch, and they provided facilities for a snack bar, dormitory, first aid room, classroom, locker space, ski repair shop, waxing room, and offices. Skiing at SU can trace its origins back to the Outing Club, founded by College of Forestry professor Fay Welch in 1935. The club sponsored SU’s first ski team, and skiing was officially added as an intramural sport at SU for the 1937-1938 season. The following year, Welch helped to found the Ski School, which later was adopted as a part of the Department of Athletics in 1947, when skiing became an official sport at SU. Outside of competitive skiing, students were able to attend Ski School for credit, and the Ski Lodge and accompanying facilities were also open to students, faculty, staff, and their families for recreational use. 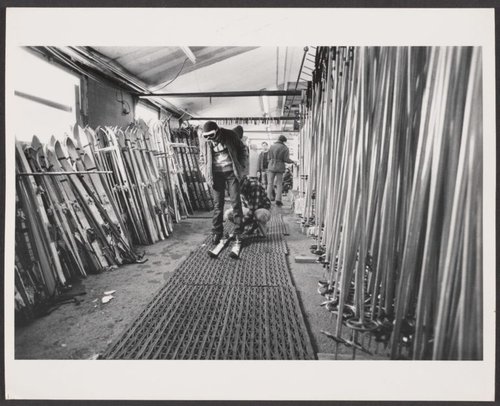 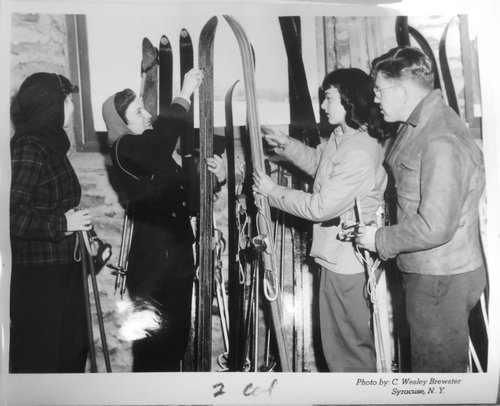 A group of skiers preparing for the slopes. Syracuse University Photograph Collection. 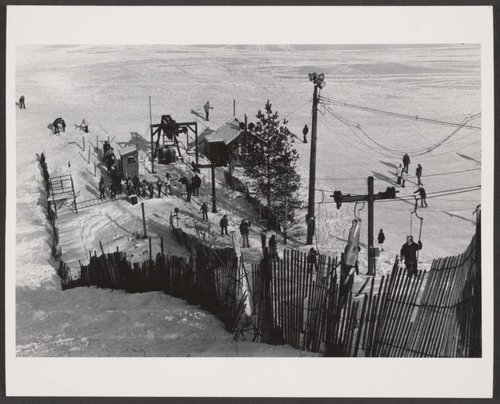 In addition to looking up the history of the Ski Lodge and skiing at SU, my research included finding historical photographs as well. Through that exploration I discovered some pretty spectacular photos of ski jumps and found out that, during a thaw, skiers use roller-skis to keep up their training. 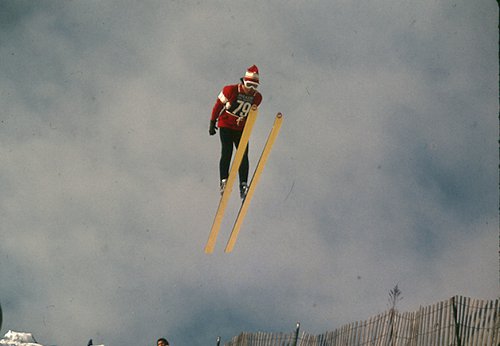 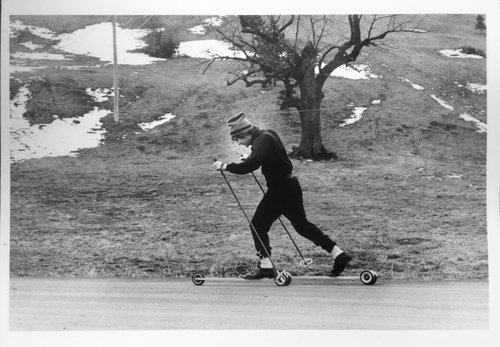 But my favorite activity I researched was the Winter Carnival. What began as a half-day carnival in 1933 evolved into a full weekend of events, including skiing and skating competitions. 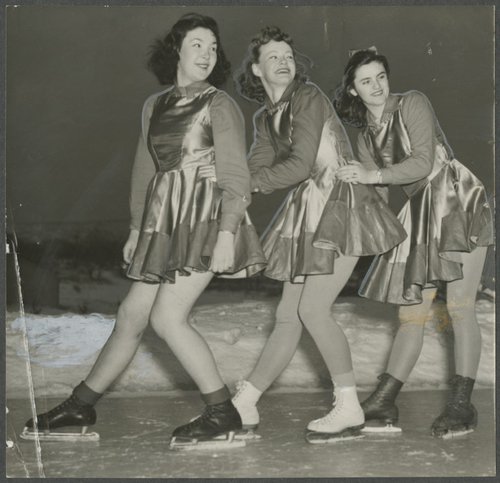 There were several other events for the less athletically inclined as well. Over the years, a snow sculpture competition became one of the main attractions for the carnival as groups of students teamed together to craft colorful sculptures that, in some cases, occupied the entirety of their front lawns. As much as SU students can grow tired of the snow, it was great to see that there were traditions that embraced the joys of winter as well. 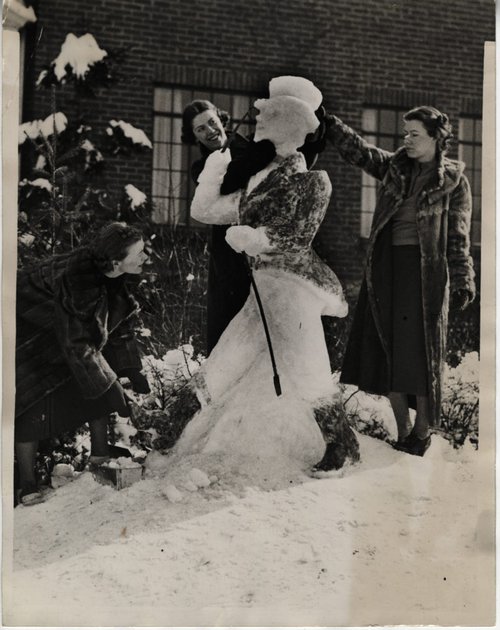 In a similar spirit of whimsy, the carnival included an informal dance called the Stockingfoot. According to tradition, students attended this dance without shoes and, in later years, sporting their very own handmade stockings. There even was a competition for best socks. Supposedly, this all began in 1936 when the carnival organizers had difficulty finding a venue. The only space available had just had the floors replaced, and so the manager allowed the dance to be held there under the condition that students not damage the floors. The organizers saw this as no problem and promised that the students would even remove their shoes. And so, a tradition was born. Not long after, in 1942, the Sno Ball, a formal dance which included the crowning of the Snow Queen, was added to the final evening of Winter Carnival events. 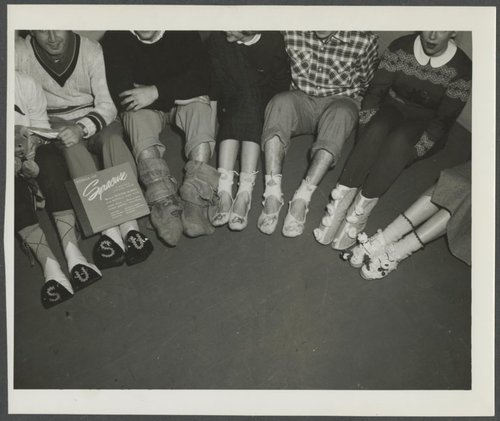 Students show off their homemade stockings. The Stockingfoot Dance, an informal dance at which students traditionally did not wear shoes, included a competition for best stockings. Syracuse University Photograph Collection.

The Winter Carnival was a major event at SU until it hit a lull in the 1960’s. Not long after that, South Campus was redesigned to create more student housing, including the Skytop Apartments. 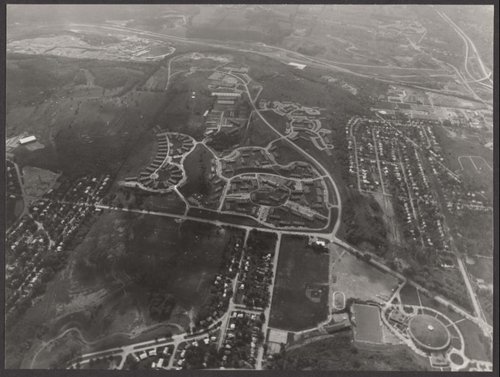 The Ski Lodge was left presumably unused, or possibly used for storage, until it was renovated again and the Inn Complete took over the space in January 1994. As the Inn Complete, the barn today is a pub and event space for graduate students, faculty, and staff. 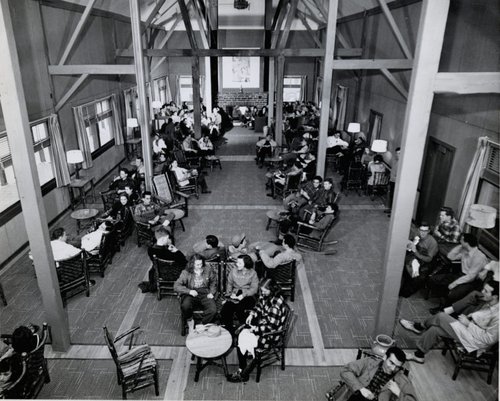 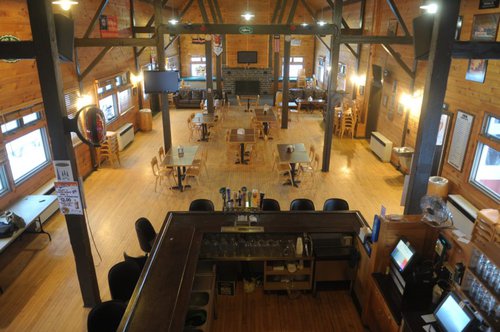 The Inn Complete, January 25, 2011.
I’ve spent a lot of time with the SU Photograph Collection through my reference work over the last couple of years, and during that time it’s become one of my favorite collections at the SCRC. There is always something to be said for putting a picture to words and using photographs to supplement text-based research. This project was no exception. Not only did I get to see the University Farm and the Ski Lodge in their full glory, but there are also the smaller details that add richness to the history — the styles of clothes, hair, and shoes, the changing landscape of SU’s campus, and even the quality of the photographs themselves. Then there are the photographs that convey details, such as the roller-skis, that often don’t make it into the written record through event programs or press clippings. Seeing people in action brought the narrative to life, and a research project that was ostensibly about a building became a project about the history of the SU community.