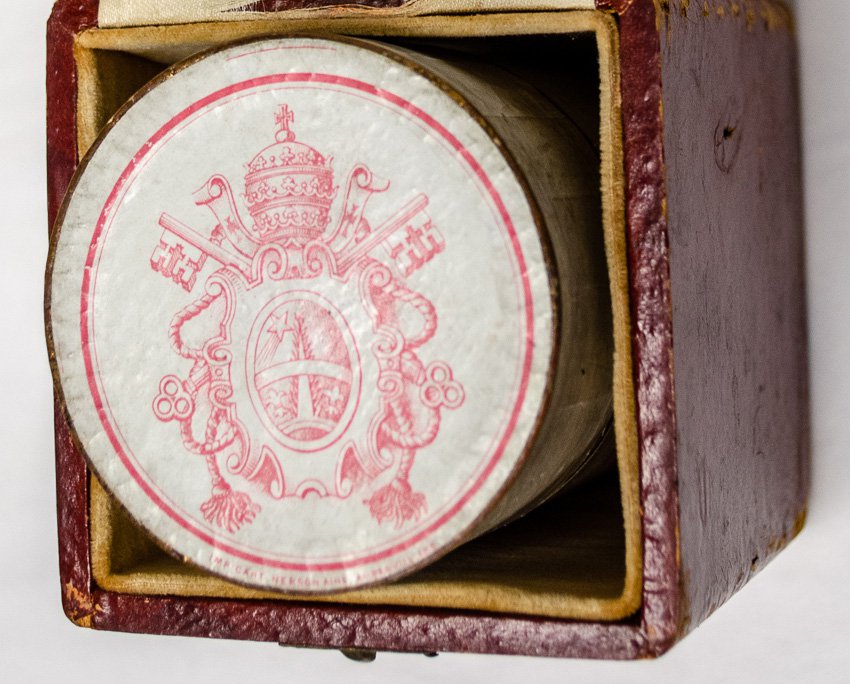 You would be forgiven for thinking you were looking at some kind of holy relic if you glanced quickly at the box below from SCRC’s collections. Between the latched leather carrying case, complete with embossed lid, and the crest stamped on the top of the cylinder inside, there is an attributed value given to this object by the company that produced and sold it in 1903. 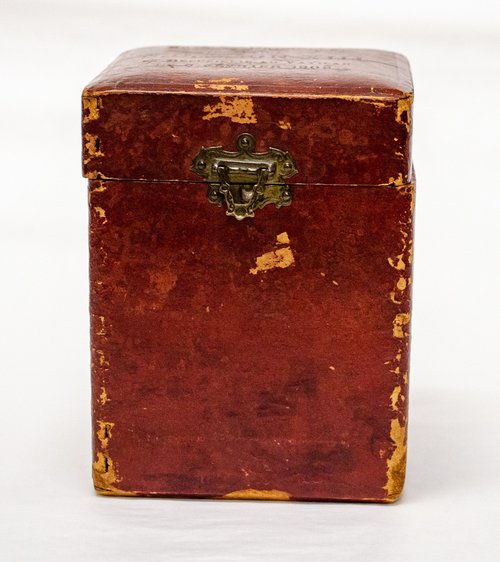 The top of the box containing the Pope Leo XIII cylinder.

This cylinder, which is part of the Belfer Cylinders Collection, contains a recording of Pope Leo XIII singing “Ave Maria”.

The Belfer Cylinders Collection contains over 20,000 cylinder recordings, 12,000 of which are unique titles, and only about 1,600 of which have been currently digitized. Deciding which of these titles is best-suited for prioritized preservation consists of a challenging series of judgement calls, often based on the limits of time and funding available, meaning that many cylinders continue to deteriorate in the meantime.

Below, Jim O’Connor discusses making his own judgement call, in choosing to feature this particular cylinder for today’s blog post.

On the Topic of Belfer Cylinder Recordings

I don’t know why I have been so particularly drawn to this cylinder recording of Pope Leo XIII. With American Archives Month in mind, I considered choosing several sound recordings at Belfer Audio Archive and Laboratory, trying to identify one that, in my opinion, best exemplifies the need for archives in general. That’s a lot of pressure to put on one little recording, but I daresay the 1903 cylinder recording of Pope Leo XIII fits the bill. This isn’t, I don’t think, lapsed-Catholic guilt: Beyond the historical interest of the artifact, the pope was a force for change in the Roman Catholic Church in ways that provided direct benefit to researchers. 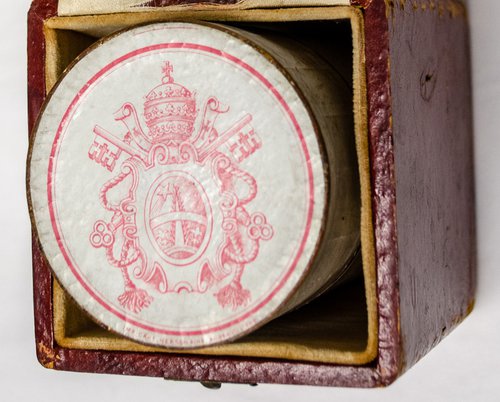 In a letter dated August 18, 1883, Pope Leo XIII wrote an open letter to the Prefect of (what used to be called) the Vatican Secret Archives, the Librarian of the Roman Catholic Church, and the Vice Chancellor announcing the opening of the Archives to researchers. This move provided researchers with access to an estimated 50 miles of shelving in the Archives.

It’s only one of the ways Pope Leo sought to modernize the Church, and I know this through Patty Giles, with whom I had the genuine pleasure of sharing virtual “coffee” with at one of the SU Libraries’ excellent Random Coffee events. Beyond her work as a Library Technician in the Department of Learning and Academic Engagement, Patty is a PhD Candidate in Religious Studies. Before that she earned an MDiv from Harvard Divinity School with a focus on religion and art. In Patty’s words:

“In the first centuries of the modern era, the Church responded cautiously to the advances of liberalism, science, industry, and art. In 1877, while still the Archbishop of Perugia, the future Pope Leo XXIII wrote a Lenten Letter in which he drew a distinction between divine truths, which are essential and unchangeable, and the truths of the ever-changing world, which are revisable and subject to judgement in accord with the circumstances of the time. As Pope, Leo regarded the Church as a beacon by which, in the light of divine truth, the modern world could judge and act to its benefit in moral relations, political conditions, and physical comforts. Such judgement could lead to beneficial action such as protecting workers rights, opposing slavery, expanding access to education and modern healthcare. Thus, it is not surprising that Pope Leo embraced the benefits of new technologies of communication." Patty Giles

Pope Leo XIII served as the head of the Catholic Church for a quarter-century, from 1878 until 1903, and, as such, he was the first pope to have his voice recorded. This recording was made on two cylinders at the Vatican on February 5, 1903, by inventor and entrepreneur Gianni Bettini, who also recorded Mark Twain and Benjamin Harrison, among other individuals of renown. Through his company, the Société des Microphonographers, Bettini of Paris, would lease the rights to Columbia for release in the U.S. SCRC holds the French Gold Moulded Bettini cylinder. The title, “Prière Prononcée par S.S. Leon XIII et Recueillie au Vatican le 5 Février 1903,” translates as “Prayer delivered by H.H. Leon XIII and recorded at the Vatican on February 5, 1903.” On the recording, Pope Leo recites the “Ave Maria” (Hail Mary) in Latin, as well as a Benediction. In the case of the Catholic Church, the Benediction of the Blessed Sacrament is a ceremony within the mass in which the priest blesses and dispenses the Eucharist. 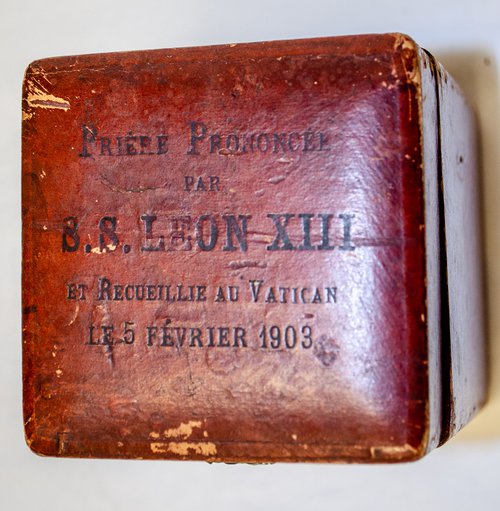 It is a good thing Bettini made the recording when he did:  Pope Leo would die in July of the same year at the age of ninety-three. It is because of this moment in history, not the Pope’s death itself, but the paradigm shift that it signals, that I ultimately chose this cylinder as a symbol for the importance of preservation. The home phonograph was a relatively new phenomenon at the turn of the twentieth century and, as such, the very concept of a recorded voice hadn’t had long to settle culturally.

Bettini’s recording of Pope Leo was released months after his death, prompting advertisements the like of, “Science Triumphs Over Death: The Living Words of Pope Leo the 13th.” I can only imagine the response from devout Catholics on hearing the Pope’s voice, crackling through the imperfect medium, resolute in purpose, from beyond the grave.