"This is not a woman who composes, but a composer who is a woman." 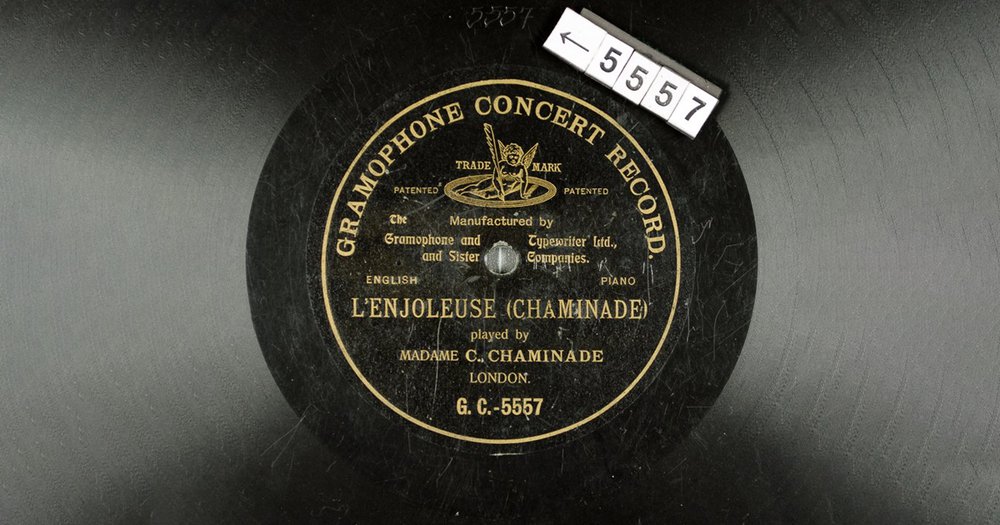 “What is your favorite recording in the collections?” I am asked this question regularly by visitors to the Belfer Audio Archive. It’s impossible to answer; there are so many outstanding recordings and sound-related artifacts in Special Collections. But in celebrating International Women’s Day, I am thrilled to offer up this record by Mme. Cécile Chaminade, which is undoubtedly one of my favorites.

In London, in November 1901, Cécile Chaminade recorded seven compositions for the Gramophone and Typewriter Company. Although these recordings are available on CD, the original 1901 discs are rare and coveted by piano music collectors. Two of these single-sided 10-inch discs were purchased at auction by the Belfer Audio Archive in 2015: Les Sylvains (GC-5554) and L’Enjoleuse (GC-5557). While not conclusive, my initial inquiries with Rachel Fox Von Swearingen, our Librarian for Music & Performing Arts, suggest that these 1901 recordings are certainly among the very earliest, if not indeed, the very first commercial releases of a female composer performing her own works. 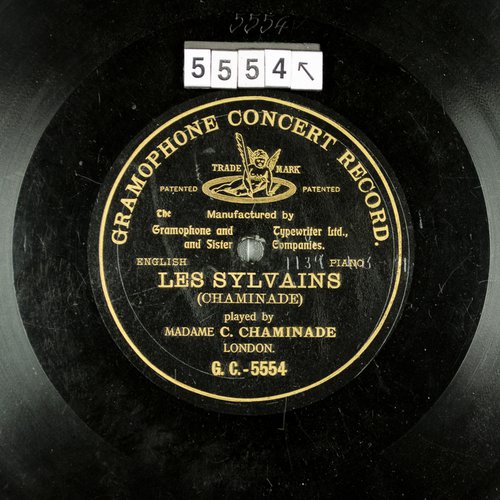 Les Sylvains (GC-5554), one of the seven single-sided 10-inch discs compositions Cécile Chaminade recorded for the Gramophone and Typewriter Company in 1901.

Cécile Chaminade was born Cécile Louise Stéphanie Chaminade on August 8, 1857, in the Île-de-France province near Paris, France. She was a composer and pianist known mainly for her piano music, which she performed on concert tours in England and the United States.

Chaminade initially studied music with her mother, a singer and a pianist. At the age of 8, she astounded composer Georges Bizet with her talent. She later studied privately because her father objected to a formal education in music. Her teachers included Félix Le Couppey for piano, Marie Gabriel Augustin Savard, Martin Pierre Marsick for violin, and Benjamin Godard for music composition. At 18, she performed her first concert and made her first London appearance in 1892. Her performances gained popularity for her pieces, which, remarkably, were almost all published. She returned to England in the 1890s, appearing with singers such as Pol Plançon and Blanche Marchesi, but this activity ceased after 1899 due to bad reviews. 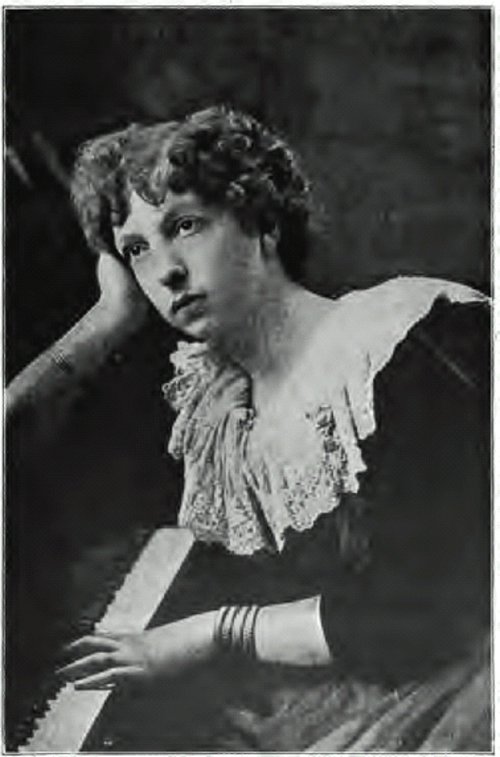 In praising Chaminade, the French composer Ambroise Thomas said, “This is not a woman who composes, but a composer who is a woman.” Isidor Philipp of the Paris Conservatory also supported her works. Despite winning broad popularity and considerable sales success for her piano pieces, Chaminade’s more serious music was less well-received, particularly by the day’s mostly male critics. Her music includes opera, ballet, and orchestral pieces. The work is refined and melodic, hinting at a whimsical sense of humor. It seems likely that gender biases guided detractors of her talents rather than the work’s merits.

Chaminade married Louis-Mathieu Carbonel, a music publisher, in 1901. A much older man, he died in 1907, but Chaminade never remarried. 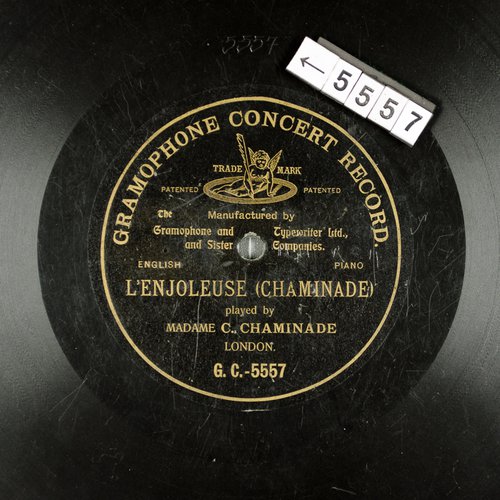 L’Enjoleuse (GC-5557), one of the seven single-sided 10-inch discs compositions Cécile Chaminade recorded for the Gramophone and Typewriter Company in 1901.

In 1908, Chaminade was well received on a concert tour of the United States, taking in 12 cities. At her debut American concert, she played the solo section of her composition Konzertstückwith the Philadelphia Orchestra. In 1913, she was awarded the Order of the Legion of Honor, making her the first female composer recipient.

In the period leading up to and following World War I, Chaminade recorded piano roll performances while her popularity declined. As she aged, she composed less, ultimately retiring to Monte Carlo, where she died on April 13, 1944, at 86.