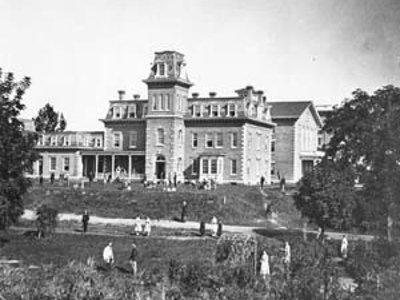 Our regional upstate New York history collection reflects the history of the state from the middle of the state along the Erie Canal. Because of our central location, we've been able to gather documentation of national significance that would serve as a resource for the history of several regions in the state.

The history of upstate New York unfolded as communities developed along the Hudson River and then the Mohawk River valley (and later the Erie Canal), extending both northward and westward. The presence of a major salt works in this area also accelerated the development of upstate New York. The commercial and cultural growth of the state followed first along these navigational routes and then penetrated the rest of the territory.

Documentation concerning the regional history is in many formats and tends to be books, newspapers, pamphlets, serials, broadsides, maps, and printed ephemera. Manuscript and printed business records and diaries also serve as important sources for the history of upstate New York and are collected as appropriate. We have also expanded the scope of the collection to extend beyond just central New York to include the Finger Lakes, the Mohawk River Valley, the Adirondacks, the North Country, and the Thousand Islands. The time period involved extends from the 18th century to the present, with the majority of documentation from the 19th and 20th centuries.

Researchers of New York State History and Ephemera might also be interested in our collections of Activism and Social Reform.

Many of the New York State collections contain visual material. In particular, see:

Examples of books in this subject area include Memoir, Prepared at the Request of a Committee of the Common Council of the City of New York: and Presented to the Mayor of the City, at the Celebration of the Completion of the New York Canals (New York: Printed by order of the Corporation of New York, 1825) by Cadwallader D. Colden; Abstract of the Argument on the Fugitive Slave Law, Made by Gerrit Smith, in Syracuse, June, 1852, on the Trial of Henry W. Allen, U.S. Deputy Marshal, for Kidnapping (Syracuse [N.Y.]: Printed at the Daily Journal office, [1852]); Adventures in the wilderness: or, Camp-Life in the Adirondacks (Boston: Fields, Osgood, 1869) by William H. H. Murray; A Sesqui-Centennial Souvenir Describing One Hundred and Fifty Years of Progress: with a Complete Story of the Sullivan Campaign of 1779 and a History of the Towns of the Finger Lakes Region Settled by Veterans of That Expedition (Auburn, N.Y.: Harry R. Melone, 1929) by Harry R. Melone; and Descriptive Guide to the Adirondacks, (Land of the Thousand Lakes) and to Saratoga Springs; Schroon Lake; Lakes Luzerne, George, and Champlain; the Ausable Chasm; the Thousand Islands; Massena Springs; and Trenton Falls (Syracuse, N.Y.: W. Gill, 1889) by Edwin R. Wallace.