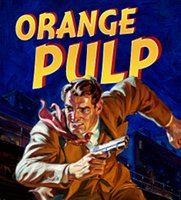 "Orange Pulp: The Pulp Magazine and Contemporary Culture," an exhibition rare in its scope, explores the world of pulp culture through 61 works that include correspondence, manuscript drafts, paintings and magazines. The exhibition draws from the collections of Syracuse University Libraries' Special Collections Research Center (SCRC) and the SUArt Galleries.

The exhibition includes many highlights such as "The Vengeance of Nitocris", the first work fiction writer Tennessee Williams ever had published; magazines containing the first appearances of iconic characters Buck Rogers and Conan the Barbarian; and 10 paintings by the prolific artist Norman Saunders.

"When people learned I was coming to work at Syracuse they told me I had to check out SU’s pulp magazine collection," says pulp culture enthusiast Gary Shaheen, co-curator of the exhibition and SU alumnus. Shaheen, senior vice president at the University’s Burton Blatt Institute, has been a life-long collector of pulp magazines. "There has been a growing interest in pulp culture over the past few years and collectors are well aware that SU's collection is one of the best in world. When I saw the collection for myself, I knew I wanted to contribute." Shaheen donated the Weird Tales magazine that contains Williams' first published work, along with several other magazines that will be on display.

The SCRC began its pulp magazine collection with the acquisition of the Street and Smith archive in 1967 and continued to acquire pulp through the acquisition of the A.A. Wyn (Ace Books), Hugo Gernsback and Forrest J Ackerman collections. Dozens of pulp magazines will be on display, notably titles like Weird Tales and Amazing Stories; a signed letter from Isaac Asimov to Astonishing Stories publisher Frederik Pohl, in which he tries to sell his science fiction short story; and correspondence with figures like Ray Bradbury are also included in this exhibition.

Pulp magazines, named for the cheap and abundant wood pulp that publishers began using after 1850 to print reading materials for a mass audience, sported eye-catching covers and included detective, adventure, western, horror, romance and science fiction stories. According to co-curator Sean Quimby, director of SCRC, "This was literature tailored to specific tastes, intended to entertain in predictable ways." He notes: "Though the form of the pulp magazine died by 1960, the concept of pulp lived on in glossy, photo-dense magazines, paperback novels, comic books and film." Quimby's point is illustrated by the inclusion of several issues of the popular pulp magazine The Shadow, which originated on radio as the narrator of "Detective Story Hour." Quimby maintains that pulp magazines, with their intensely involved readership, "helped make possible contemporary interactive media culture."

Ten lush and dramatic paintings by Saunders from University Art Collections are also included in the exhibition. "The pulp magazine cover art paintings by Saunders are very striking and they illustrate wonderfully the imagination of the writers and stories that commonly appeared in these publications," says Domenic Iacono, director of SUArt Galleries. "One can easily imagine how the Saunders cover art captured the eyes of potential buyers, made them stop for a moment and look at the magazine, and ultimately buy a copy for themselves. Much like those readers, I suspect people walking by will get swept into by the gallery when they have a look at one of the paintings inside."