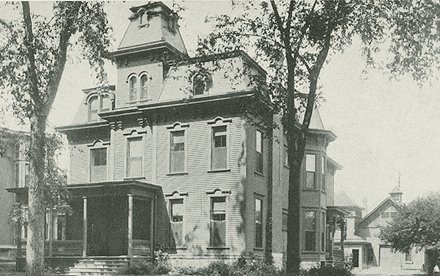 Notes: Built by Rev. Jesse Peck, for whom Peck Hall is named, it served as the residence of Chancellor James Roscoe Day from 1902 to 1915. When SU acquired the William Nottingham property for use as the Chancellor's House in 1915, the University Avenue property was transferred to Mr. Nottingham, who lived there until his death in 1921. Later, the residence became the Theta Phi Alpha house and, along with its carriage house, was eventually used for apartments. SU acquired the property again in 2004 and, due to structural concerns, it was demolished.