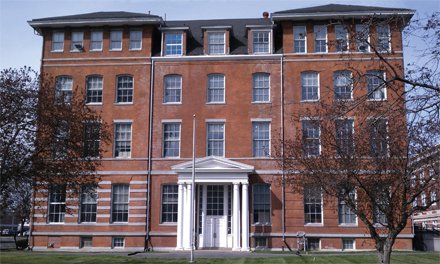 Named for: Jesse T. Peck, one of founders of SU, first president of Board of Trustees, and Bishop of the Methodist Church

Notes: The building opened in October 1896 as the College of Medicine. The first floor held a large lobby, study rooms, a lecture room and library. Other floors held laboratories, offices and supply rooms. A cold storage facility in the basement operated by the ammonia process for preservation of materials. In 1937 when the new Medical College was constructed, the building was occupied by the School of Extension Teaching and Adult Education, which became University College in 1946. The main entrance was changed to East Genesee Street. On March 30, 1958 the building was renamed Peck Hall. Although sold in 1996, Peck Hall was leased by SU in 2012 to house Falk College's Department of Marriage and Family Therapy.