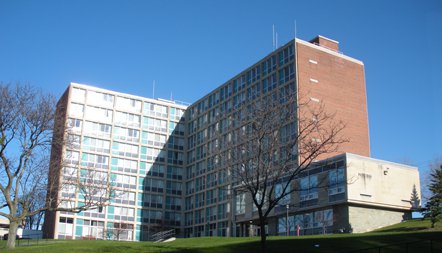 Funding: Federal Housing and Home Finance Agency, in addition to a major contribution from the Booth Ferris Foundation

Notes: Booth Hall was constructed as a companion building to DellPlain Hall on the site formerly occupied by the Flick Apartments. In 1989, an improvement project added new carpeting, furnishings, and new fire walls. Several two-and four-person suites were added in 1994. Each floor has a lounge, study room and kitchenette, while the main floor has a lounge and laundry facilities.