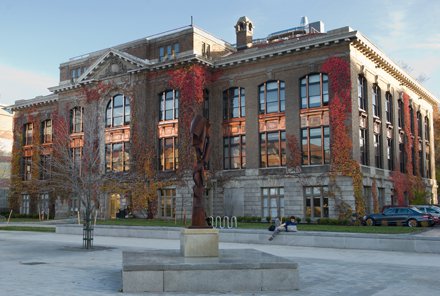 Notes: A chemistry building had been needed for years since the Department of Chemistry outgrew its cramped quarters in the basement of the Hall of Languages. According to newspaper accounts of the time, constructing Bowne required considerable stripping of the foot of Mt. Olympus, which accounts for the shape of the building.

The building has undergone numerous renovations. In 1989, classrooms, labs and offices were renovated and asbestos removed. In 2010, Bowne became the new home of the Syracuse Biomaterials Institute. The space, which covers part of the third floor and the entire fourth floor, was revamped using a variety of sustainable techniques and materials. Seventy-five per cent of the demolition debris was recycled and steel framing was made from recycled scrap iron. Original architectural details such as exposed decorative steel trusses and original windows were preserved.