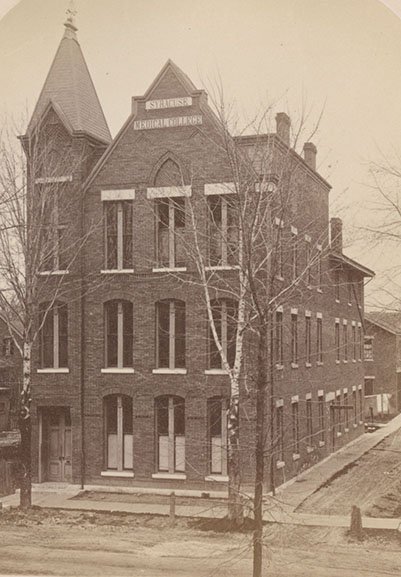 Notes: The former carriage factory had been purchased in 1875 by an independent company formed by the Medical Faculty that remodeled it to include lecture rooms, a library and museum, amphitheater, dispensary and laboratories. An adjacent blacksmith's shop was remodeled into a chemical lab. In 1889, the property and buildings were deeded to Syracuse University as part of the legal union of the Medical College's assets and the University, creating the new "Syracuse University College of Medicine." The deteriorating building was demolished in 1896 to make way for construction of a new home for the College of Medicine. The small adjacent building holding the chemical lab, referred to as South College Building, was renovated to provide living quarters for the janitor and a smoking room for the students; it no longer stands.

The medical college saw its inception on January 2, 1872 when the first medical faculty met to form the "College of Physicians and Surgeons of Syracuse University." Classes began in October 1872 in rented rooms in the Clinton Block, as Syracuse University had no space to spare in its rented quarters in the Myers Block and its first structure, the Hall of Languages, was not yet completed. The relationship between the College and SU was nominal in the early years with the University unable to provide financial support. Although degrees were conferred by SU, the college held virtually independent status. Medical faculty formed the Syracuse Medical Library Association of Reference in 1875 in order to purchase an adequate building for instruction. 1875 also saw the first use of the term "College of Medicine" by the faculty. Under the leadership of Chancellor Sims and with its finances improving, SU reached an agreement with the Association in 1888, though not completed until 1889, to obtain the McBride Street property and provide much-needed financial support for the College of Medicine.