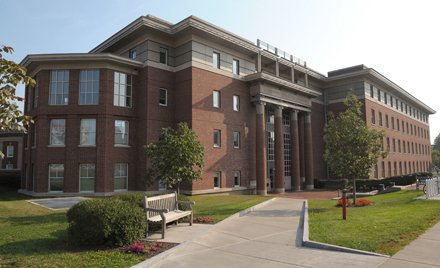 Notes: The six story building is linked to Maxwell Hall by a three-tiered atrium. When built, it housed the departments of the Maxwell School, including history, economics, political science and geography. Included were a public events room, a 100-seat lecture hall, administrative and faculty offices, offices for a number of Maxwell School programs and a café. Themed seminar rooms such as the American Experiment Seminar Room honored the Seneca Falls Women's Movement, while the People of the Longhouse Seminar Room held banks of chairs against the walls and an open center space inspired by Onondaga Nation council meetings.