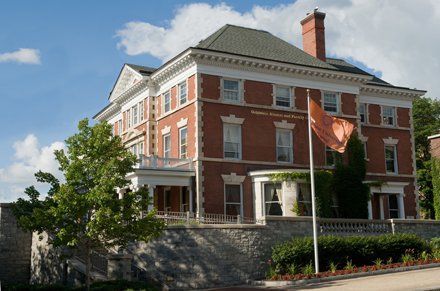 Named For: Alfred R. and Ann Lubin Goldstein, Class of 1948

Notes: Built by the Delta Kappa Epsilon Fraternity as a chapter house, the house was opened for the first time at the annual banquet of the Central New York Association of Delta Kappa Epsilon on June 9, 1903. In 1974 Syracuse University bought the house when the chapter moved to Comstock Avenue. After remodeling, the new Faculty Center opened with accommodations for meetings, lunch or informal relaxation.

In spring of 1996 plans for the Goldstein Alumni and Faculty Center were announced. The center ceased operations in December 1996 and reopened in August 1997 as a renovated and expanded facility including the new home of the Office of Alumni Relations. The modernized interior brought the building up to current codes while preserving the building's original character. Renovations included a brick patio to enhance the front porch.

In 2022, the building became a visitors’ center where the Office of Admissions resides.