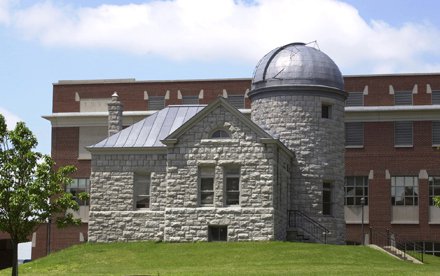 Original Location: south side of hill west of Hall of Languages

Notes: The second building on campus, the observatory was named in memory of the donor's son, Charles Demerest Holden, who died in 1883. E. F. Holden also donated $25,000 as an endowment to help maintain the building. When completed, the observatory held an eight inch Alvin Clark telescope, 3 inch reversible transit, a comet seeker, chronograph and chronometer. The telescope was housed in a tower with a rotating dome. In 1980, the building was placed on the National Register of Historic Places.