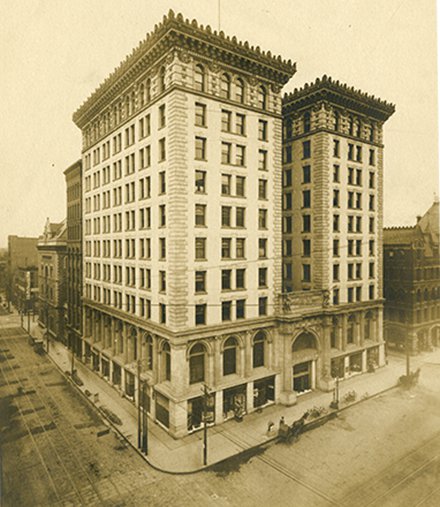 Contractor: A. Friederick and Sons, Rochester

Notes: The University Block was constructed on a parcel of land half of which was donated in 1871 by Eliphalet Remington of Ilion, NY, a trustee of the University. The other half of the property was acquired by SU in 1877 upon the dissolution of the College of Missionaries. The College of Missionaries, chartered in 1871, had no legal connection to SU but did share several trustees, notably Remington; the college never held any classes. The Syracuse University College of Law moved to the University Block's second floor from the Bastable Block in 1898 and remained there until 1904 when it moved to the Crouse Mansion.

In 1973 the building was sold to Henry Hart Rice of Katonah, NY, and Sherlyle Properties of Syracuse, whose principals were Sherwood Finn and E. Carlyle Smith. Finn and Smith were also principals in Longley-Jones Associates, a Syracuse real estate firm that had managed the building since 1967. The selling price was said to be "in excess of $1 million," according to then-Syracuse University Vice President Francis A. Wingate.