An Act of Moral Courage

Tsuneishi, a 1943 graduate of Syracuse University praised Tolley for accepting Tsuneishi and “some of 100 of my Japanese American colleagues" 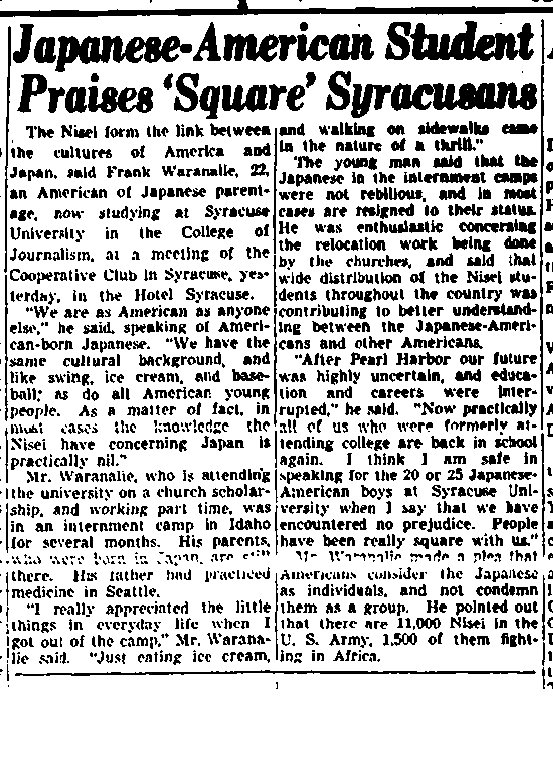 “This is a forty year letter of gratitude.” This first sentence of a letter that had been stored with thousands of other letters in an archival box, jumped out at me. When processing so much loose material, archivists rarely have time to read individual letters, but this opening line immediately captured my attention. I couldn’t resist reading on. The letter continued, “I have never explicitly thanked you and Syracuse University for accepting me from the Heart Mountain War Relocation Center in Wyoming.” With this line, I understood that this was not an ordinary letter. 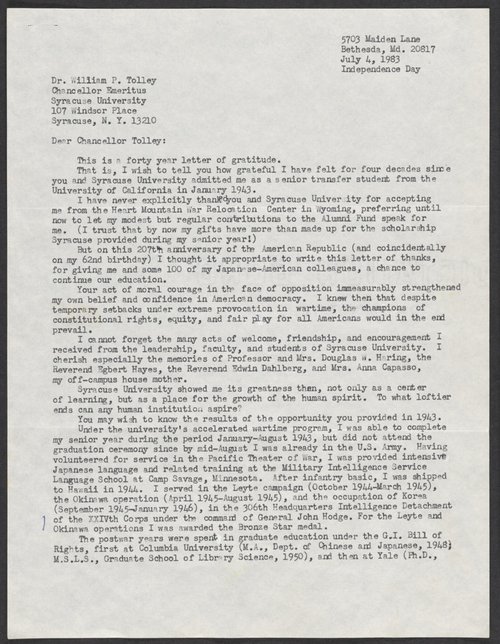 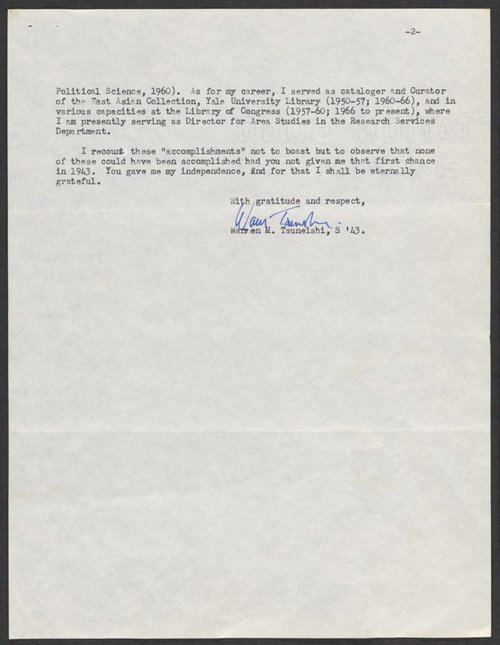 In January 2018, I started processing the records and papers of Syracuse University Chancellor William P. Tolley. Shortly before starting the project, the University Archivist, Meg Mason, told me a story of Tolley surreptitiously admitting Japanese American students to Syracuse University from internment camps during World War II. She explained that Tolley wrote of admitting the students in his memoir, yet no primary source material has emerged to support the story. She hoped I could find further documentation on this remarkable story, since it is so under documented. And that is precisely why I understood the importance of this letter.

The letter was from Warren Tsuneishi, a 1943 graduate of Syracuse University. In the letter, Tsuneishi praised Tolley for accepting Tsuneishi and “some of 100 of my Japanese American colleagues" to the University, defining this as an “act of moral courage.” Tolley’s decision to admit students from internment camps, Tsuneishi wrote, “immeasurably strengthened my own belief and confidence in American democracy. I knew then that despite temporary setbacks under extreme provocation in wartime, the champions of constitutional rights, equity, and fair play for all Americans would in the end prevail.” Tolley’s decision to allow the writer into the University, he wrote, had profound consequences for his life: after graduation he served in the US Army with honors in the Pacific Theatre as a translator of intercepted Japanese internal documents, received post graduate degrees from Columbia and Yale, and a long career working at Yale and the Library of Congress. “I recount these ‘accomplishments’ not to boast,” he wrote, “but to observe that none of these could have been accomplished had you not given me that first chance in 1943.”

The letter moved me, and as I began to show it to my coworkers, they were moved as well, not only by Tolley’s act of generosity when it was unpopular to do so, but also because Tsuneishi took the opportunity to live a life of distinction. I was also excited that we had a little more documentation of an event about which we know so little.

Considering that I found the letter so early in processing Tolley’s records and papers, I was hopeful that I would find more regarding the Japanese American students he had admitted, but unfortunately I was unsuccessful in doing so.

Tsuneishi’s extraordinary letter spurred my interest in these students, and I was able to find some additional pieces of information. For example, the local Syracuse Herald-Journal reported that in 1943 two Japanese American students, Frank Watanabe and May Ohmura, made public speeches defending their presence at Syracuse University. “We are as American as anyone else,” Watanabe told a crowd at the Hotel Syracuse. “We have the same cultural background and like swing, ice cream, and baseball as do all Americans.”

I was also able to find a photograph of Warren Tsuneishi from 1945, during his time in the Military Intelligence Service from the archives of the Monrovia Historical Society located in Monrovia, CA, linked here: https://cityofmonrovia.pastperfectonline.com/photo/0DB2BF34-41A9-4128-BDE3-644225736421. 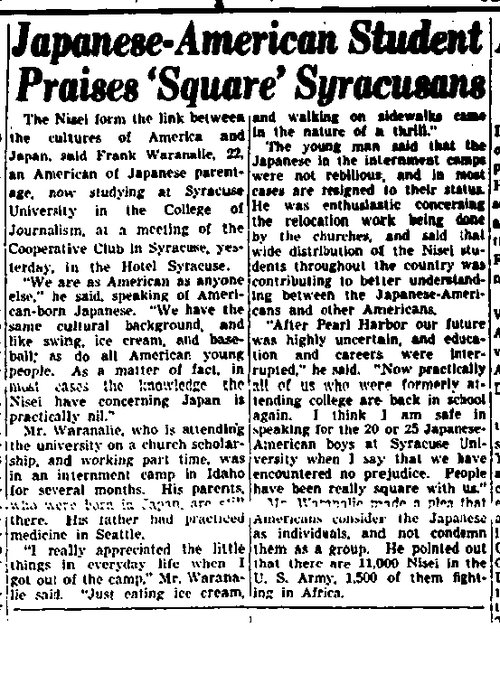 Clippings and photographs like this were exciting to find, but overall, we have very little information on these students and how the University admitted them. Other than Tsuneishi, Watanabe, and Ohmura, we are unaware of even their names. We don’t know about their personal stories, their journeys from the camps to our campus, and their experiences at the university. As an archivist, I am interested in these stories and want to preserve them.

As the university celebrates its sesquicentennial, we have an opportunity to pause and reflect on our history and values. Chancellor Tolley’s admittance of Japanese Americans when it was unpopular to do so reflects our values of fairness, inclusion, and equity. The lack of archival documentation about this important part of the University’s history is disconcerting. Thus, the University Archives welcomes from the Syracuse University community any information or materials that shed light on this remarkable story.