Marcel Breuer Digital Archive for SCRC. The Breuer Archive is the digital repository of archival materials relating to the twentieth-century architect, Marcel Breuer. 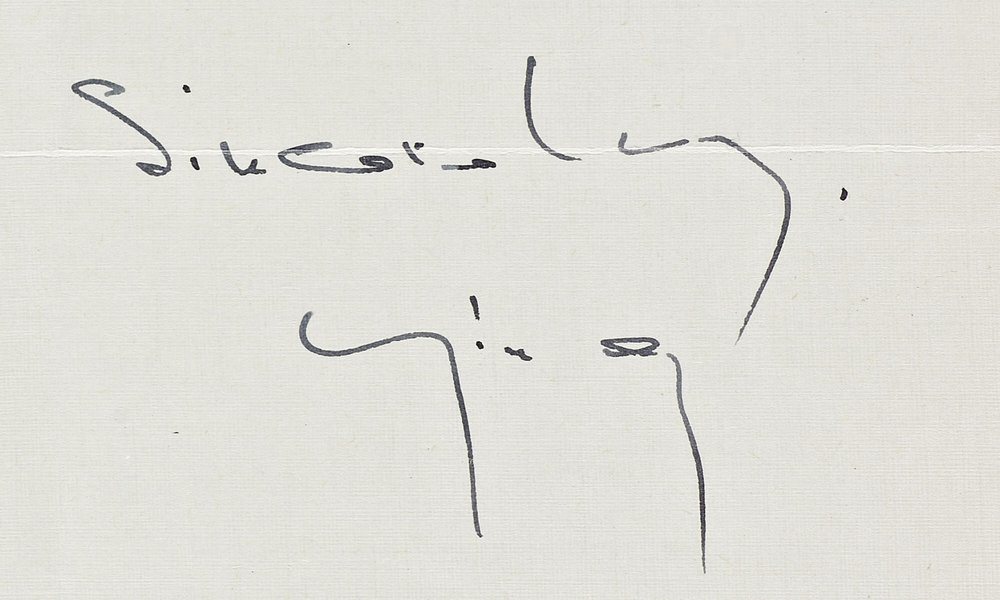 This summer, I worked and interned remotely with the Marcel Breuer Digital Archive for SCRC. The Breuer Archive is the digital repository of archival materials relating to the twentieth-century architect, Marcel Breuer, composed of materials from numerous institutions, SCRC among them. Over the summer, I worked with many other library staff members and students to transcribe the handwritten correspondence of Marcel Breuer. The transcription project will be an invaluable time-saver, allowing researchers to search the contents of the archive’s documents. As an intern for SCRC, I also created lesson plans with the archive’s materials, designed to provide professors with a digital alternative to on-campus instruction in SCRC. 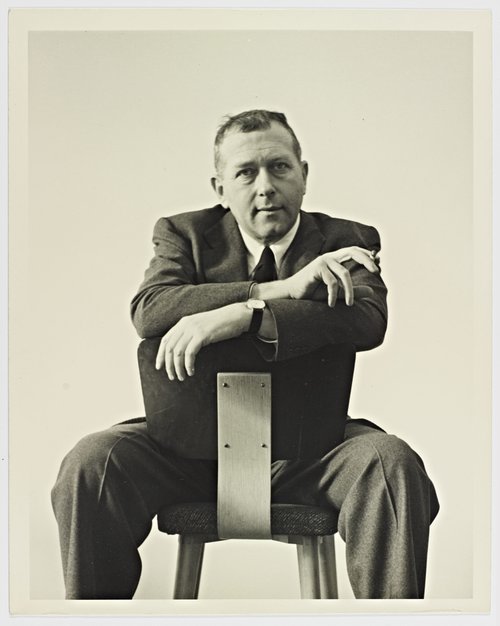 Hidden within these documents, I found some amazing individuals, whose stories had been forgotten. These people were not the celebrated Marcel Breuers of history, but their stories survive in the archival collections dedicated to others.

Ying Li was one of these people.

I first found Ying Li in a letter written by Marcel Breuer, where he writes, “My best to Rolland, Albert, and the Li girl.” This sentence caught my eye because I had come across very few Chinese names in Marcel Breuer’s documents. Through the archive’s Names List, I connected “the Li girl” to Ying Li, whom the Archive describes as a “former student of Breuer’s who worked in his office c. 1947. She left the office unexpectedly and with no explanation in the middle of work on the Scott house.” This description only served to further pique my interest: Who was she? Why did she leave? These questions led me on a quest through the Breuer Archive to find out more about Ying Li.

Ying Li was born in China around 1924. In 1946, she sailed from China with someone named KY Chen to San Francisco, CA, on route to Cambridge, MA. On May 27, 1947, Marcel Breuer wrote his friend and colleague, King-Lui Wu, about “a Chinese girl who is a graduate of M.I.T.,” who was interested in working for Breuer. This is where things get murky. The Names List only says that she left unexpectedly and without notice. However, while going through the archive, I discovered that this was not entirely true. 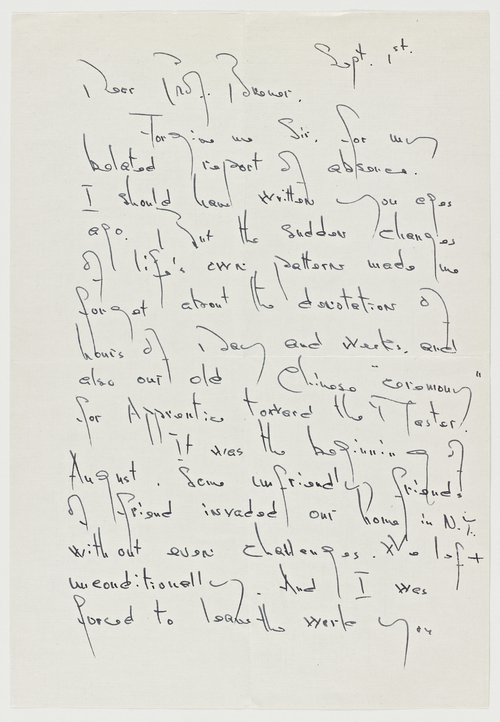 On September 1, 1947, Ying Li wrote to Marcel Breuer and explained, “Some unfriendly friends of friend invaded our home in N. Y., without even challenges. We left unconditionally. And I was forced to leaves the work you assigned unfinished to Harry…now I am a farmer instead, living with a group of old but childish people, working in the farm according to their naive rhythm of hourless day.” She concludes by thanking Breuer for letting her learn and work with him, adding, “but there are things I regreted [sic] and still regret — my uselessness, my mischief, and the unfinished end.” This document, while fascinating, raised more questions than it answered.

Despite her unusual departure, in August, Breuer wrote Rolland Thompson and Harry Seidler, two draftsmen who worked with Li on the Scott House, to “give my best to Miss Li, I think we will miss her. An architects office needs pretty girls, especially when they are intelligent, and can drive a car.” While a problematic sentence for a modern reader, the letter reveals that Breuer held no ill will toward Li. 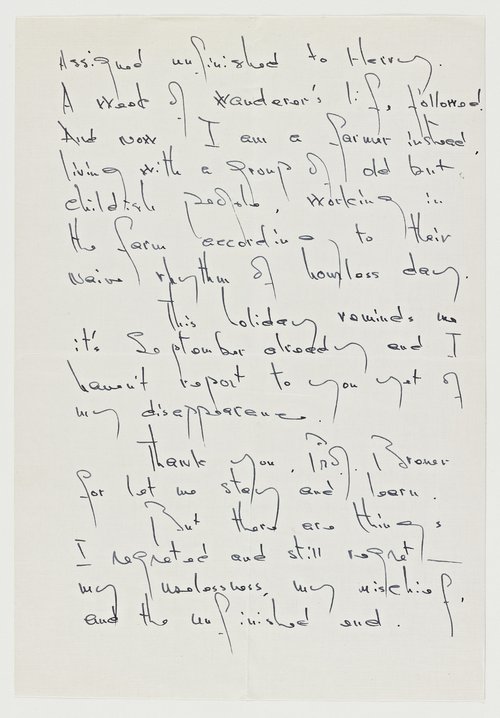 In fact, two letters from November 7, 1950, reveal that Breuer was attempting to find a way for Li to return to Cambridge. In the first, Breuer responds to György Kepes, a Hungarian-born artist, professor, and friend, and assures Kepes that he is trying to find a way for Li to return to the United States. Additionally, Breuer mentions that he has been in contact with King-Lui Wu and I.M. Pei, Chinese-born architects with ties to Harvard University, for advice on bringing Li to the United States through a visitors exchange program. In the second letter, Breuer writes to Walter Gropius, his mentor, friend, and business partner, asking Gropius to help facilitate an exchange visa for Li to Harvard University.

These letters provide a glimpse into Li’s life, but do not confirm whether she returned to China or the United States. As there is no known recorded professional or personal connection between Li and Kepes, Gropius, or Pei, we can only guess at their motivations for helping her return to the United States. We do know that Breuer, Gropius, and Kepes had all faced various immigration and travel restrictions when they left Europe just prior to WWII and that the political changes brought about by the rise of the People’s Republic of China in the 1950s may have made it more difficult for Li to leave China if she returned. Importantly, in his letters, Breuer relates that Li said if she could not come to the United States that she would return to China. Bearing these factors in mind, it is not surprising that in his letter to Gropius, Breuer writes, “No need to say that this is a bad idea.”

Unfortunately, this is the last of Ying Li’s historical record available in the Marcel Breuer Digital Archive. 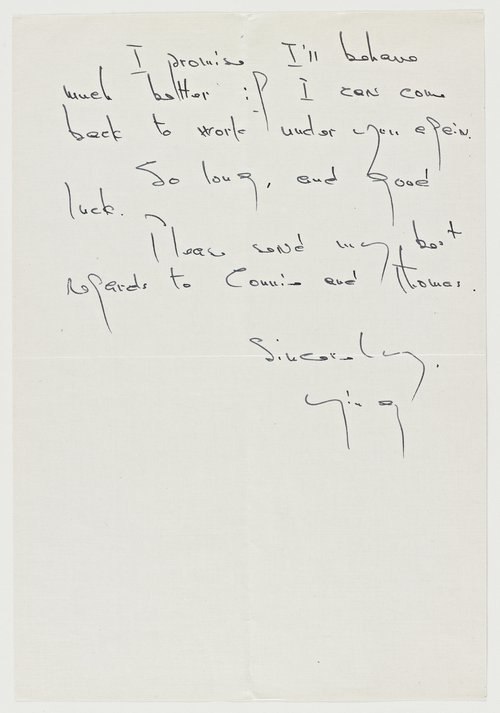 For much of our history, books and archival collections have focused on the stories of those in power. But what about those outside of that limited scope? What about people like Ying Li? A young woman born in China, who graduated from MIT, worked for Marcel Breuer, became a farmer, and then tried to come back to the United States as an architect. Her story, even if it is an unfinished one, deserves to be heard.

At least for now.