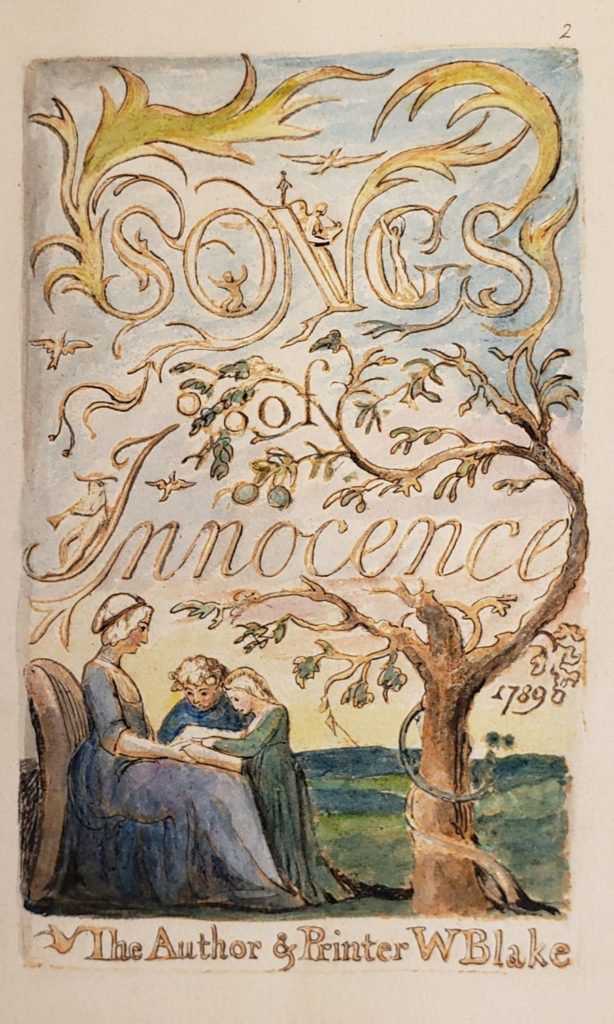 I am an Art History graduate student at Syracuse University, so it is always an exhilarating experience to stumble upon a work of art while working in the Special Collections Research Center at Syracuse University Libraries. SCRC holds a diverse group of rare books, including a 1789 edition of William Blake’s Songs of Innocence. Blake (1757-1827) was an English poet, painter, and printmaker. In 1794, Blake expanded Songs of Innocence into its final version Songs of Innocence and Experience (1794). Together, they show the two contrary states of the human soul.

The pages of our volume were removed from their binding and matted for preservation. My introduction to Blake’s Songs of Innocence came when I was asked to number the matted plates. The pages of Songs of Innocence contain a collection of poems and works of art copied from copperplate engravings and then hand-painted. I saw great care placed into each etching when I was observing the book. While prints are considered a means of duplication, every color wash by Blake gives a different life to his artwork. Some editions explore various ranges of light and shade, expanding beyond expectations of local color. 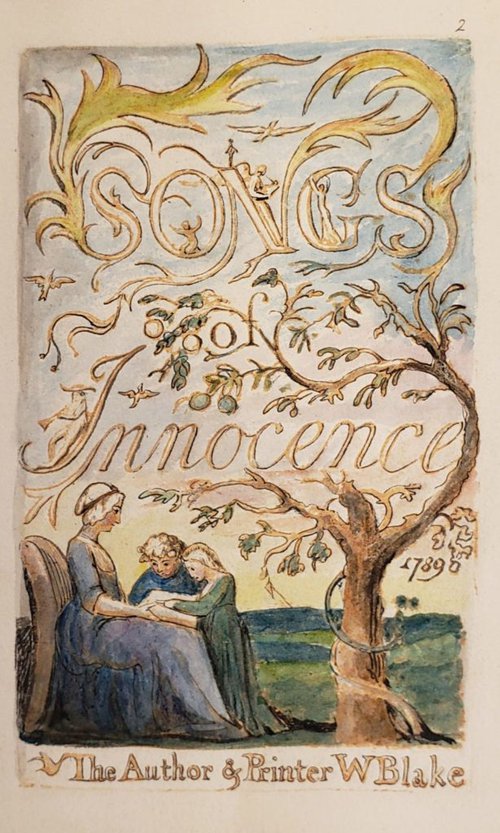 Title Page from "Songs of Innocence" 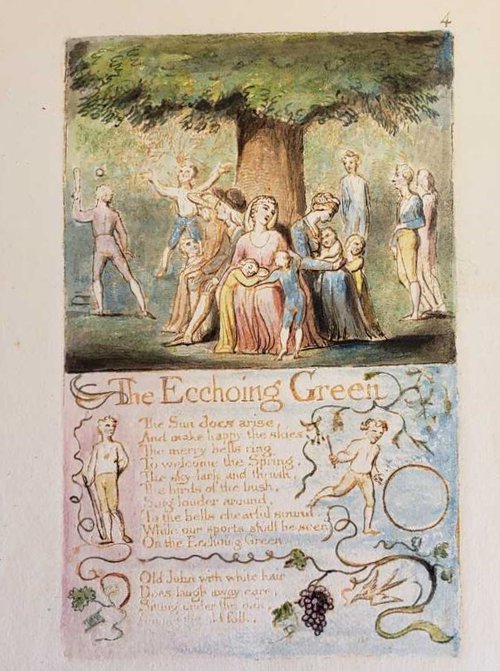 “The Ecchoing Green” from Songs of Innocence 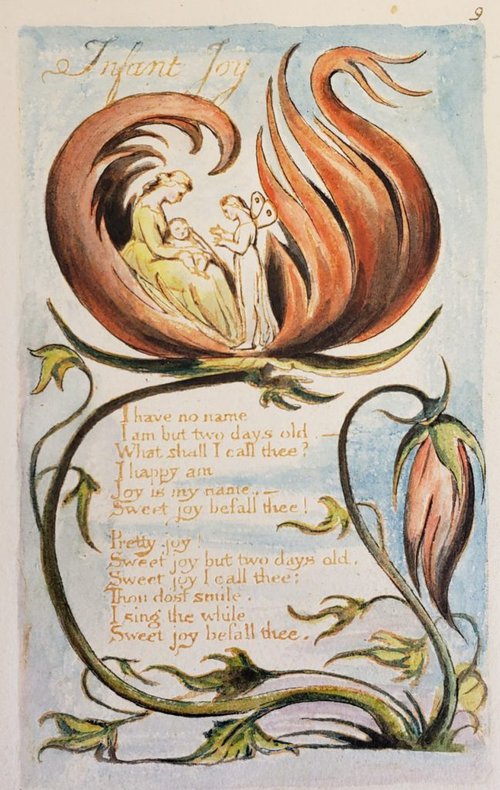 “Infant Joy” from Songs of Innocence

Largely dismissed in Blake's lifetime, his work is now considered an important example in the history of English poetry. The popularity of Blake’s writing today has led to easy access of his poems in print and online. However, it is not always easy to see a full range of watercolor washes and prints integrated with his poetry. SU’s Songs of Innocence contains unique relief etched impressions with color choices unlike other editions created during the late eighteenth century. Today, there is even an online William Blake Archive that allows you to compare the different artistic decisions. For example, the Blake Archive contains a copy of the 1789 Songs of Innocence that is currently held at the Yale Center for British Art.

When comparing Yale’s to our version from the same publication year, there are striking differences in how Blake colored each individual copy. Our edition contains darker lines from the original print while Yale’s has golden undertones. Several of our prints also depict a vivacious wash of a red to blue as seen in the lower half of “The Ecchoing Green.” That poem in Yale’s copy does not contain this coverage or vibrancy of color on the lower half of this poem.

Similarly, there is a variation in the overall tone of the poem “Infant Joy.” SU's copy of the poem places a blooming flower against a soft blue. The background leads the observer to place the plant in an environment, against the blue sky. Yale’s copy of “Infant Joy” instead contains a flattening range of colors through the sparse application of blue and green. This minimal use of tone alters the audiences’ perception of space. The use of color in Yale’s “Infant Joy” therefore becomes less of a whimsical birth and more ambiguous in its surroundings. 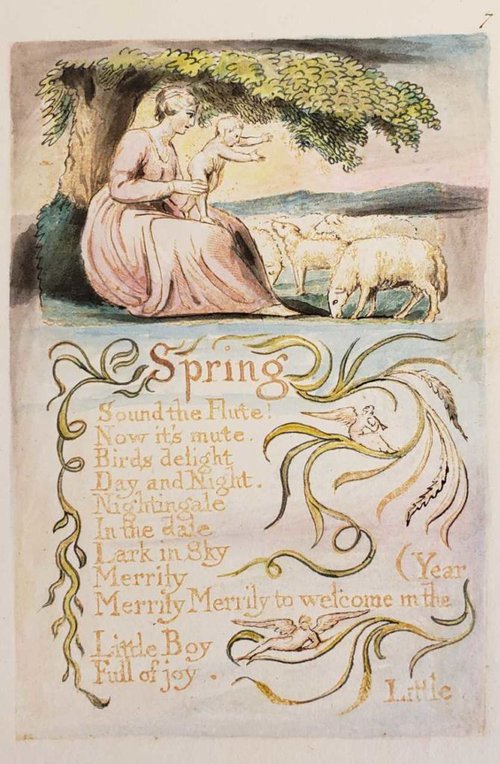 “Spring” from Songs of Innocence 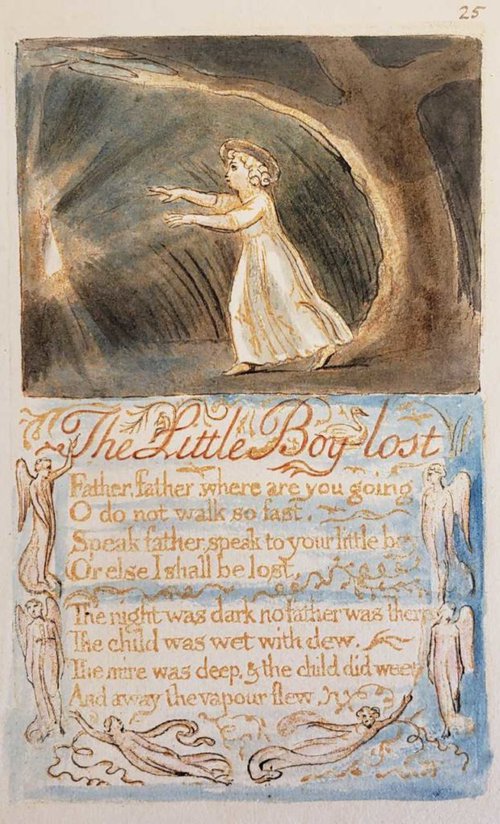 “The Little Boy Lost” from Songs of Innocence

Blake's skill as a craftsman and printmaker is evident in his integration of text and image in Songs of Innocence. Poetry creates its own visual language just as pictures do. Poetic words form a world in your mind, and Blake provides a form to that world by interweaving the words prominently among the color and forms of his poems. As seen in “Infant Joy,” the poem is placed amidst the fluid growing form as the first letter softly touches the curving neck of the blossoming plant. The leaves bend to complement the space the plant holds, creating an integrated composition. There are examples of poems that have more separation between word and image. Even in these separated images, such as "Spring" and "The Little Boy Lost" (see below), Blake fluidly activates the space of words with intricate details of wispy trees and dancing vines. Reading Blake's poetry in mass production, only existing as words, loses some of the complexity of his original integrated compositions.

It was a pleasure to have the opportunity to work with this rare work of art. If you are interested in viewing this work, visit the Reading Room at Syracuse University's Special Collections Research Center.

This post has been revised 7/15/2019 to reflect an updated description of printing technique.