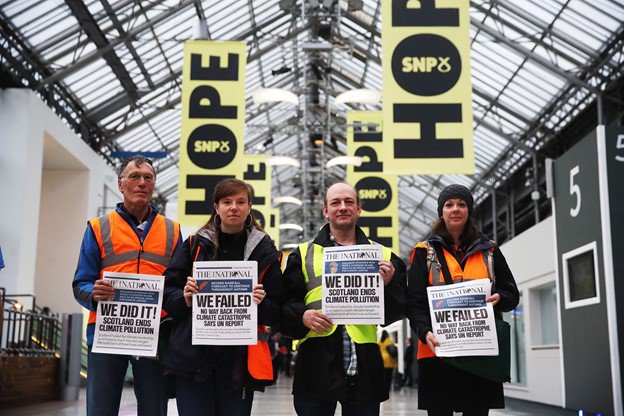 Friends of the Earth climate activists forecast alternative future newspaper headlines. Scottish National Party Conference, October 8, 2018. "Friends of The Earth 31" by Friends of the Earth Scotland is licensed under CC BY 2.0. https://creativecommons.org/licenses/by/2.0/?ref=openverse .

by Michael Pasqualoni, Librarian for the Newhouse School of Public Communications

For the widest view of all licensed news databases the Libraries make available, visit this list of SU Libraries News & Newspaper databases.

Vanderbilt’s Television News Archive and Newsbank’s Access World News are valuable databases worth the attention of many Syracuse University students and faculty investigating source material in journalism. Each invites user friendly options beyond cursory encounters with news common to briefer visits to random or unconnected individual news websites or beyond a lack of primary context, and at times intentional disinformation, which may occur when news reporting is exchanged on social media platforms. These two databases are also excellent examples that analysis of news is as much an act of viewing (i.e., the primacy of observed images or meaningful symbols or the heard phrases associated with oral traditions) as it is a literal reading of the printed word (i.e., headlines themselves being longstanding manipulation of an image – even when the image happens to be printed text).

Locate in the Television News Archive database coverage of hotly contested U.S. Presidential elections or lopsided landslide victories. Explore tragic images from national TV news of the Syracuse University campus mourning the loss of students in days immediately following the December 21, 1988, Pan Am 103 terrorist attack in the skies over Lockerbie, Scotland. Jump over into Access World News database to see how that Pan Am 103 story was covered in local print newspapers here in the city of Syracuse.

Use a resource like Newsbank’s Access World News to analyze over thirty years of discussion in Syracuse newspapers about conflicting views on the origin, history and fate of U.S. Interstate Highway 81 bisecting the central core of the city, or that highway’s problematic relationship with African American neighborhoods. Dive into full-color page coverage from the U.K.’s Guardian newspaper reflecting on economic impacts of Brexit, public health policy responses to COVID-19 or details about the climate change activism of Greta Thunberg.

Analyze collections of multiple news articles where that text mentions an anti-African American hate crime (i.e., murders of Trayvon Martin or George Floyd), perhaps contrasting sources based within one U.S. state to another or comparing how transcripts from television news reveal similarity and differences in how Fox News TV network covers a topic in comparison to how transcripts reflect that topic when reported on CNN.

For the widest view of all licensed news databases the Libraries make available, visit this list of SU Libraries News & Newspaper databases. If seeking the identity and access point for a database containing a specific individual newspaper title, enter that title into the library’s journals A-Z list.