George Fisk Comfort and the Museums Are Not Neutral Movement: Museum History at SCRC 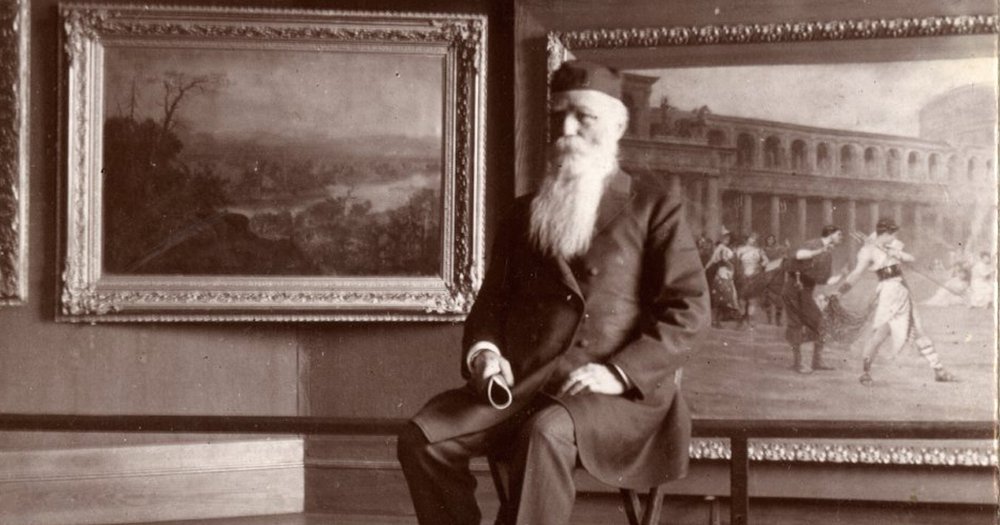 I am co-president of the George Fisk Comfort Society, a graduate student club for art history students at Syracuse, and, before this semester, I was not aware of who I was representing. George Fisk Comfort (1833 – 1910) was a liberal arts scholar and museum founder from Berkshire, New York. He brought the world of museum collections and exhibits from Europe to the American hub of New York City at the Metropolitan Museum of Art and in Syracuse at the Everson Museum of Art (formerly the Syracuse Museum of Fine Arts). As a museum studies and art history student, I am interested in the history of museums and their collections and I have visited and researched artworks at the Met for many years without knowing anything about one of the founders of the institution. In light of the racial injustices continuing to taking place in America, museum professionals La Tanya S. Autry and Mike Murawski created the Museums Are Not Neutral movement in order to change the ways that museums are visited, curated, and protested in order to build community and question the traditional role of the museum and museum educators.

Because of my interest in the Museums are Not Neutral movement and the growing cases of racial injustices in this country, I was compelled to learn more about the founding of the Met and the Everson through an exploration of Comfort’s papers. I researched the George Fisk Comfort Family Collection held at the Syracuse University Special Collections to try and piece together information about the history of institutions he co-founded and relate my findings to the present. In reading Comfort’s views on the value of art, museum collecting policies, and staffing and hiring practices, I found myself reflecting on the current practices and policies of the Everson and the Met and considering how they have both upheld and diverged from Comfort’s views in recent years. 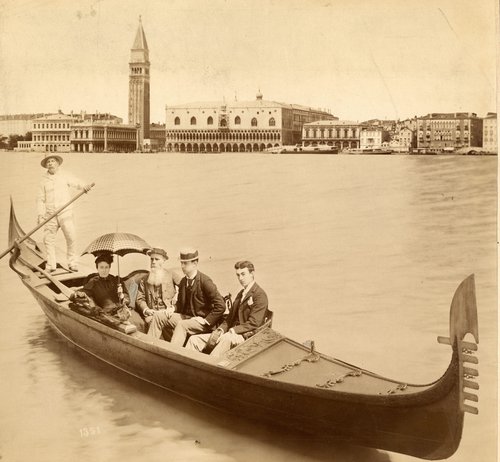 The Comfort Family in Venice circa 1892.

Comfort was quick to adopt the European model of museums, as he brought back knowledge from his overseas travels to America. Comfort first encountered the European model of a museum when he spent five years traveling and studying in Europe in the 1860s, focusing his studies on the aesthetic culture of Europe. Comfort returned to the United States with new ideas about art and museums, and taught the first aesthetics course in America at Allegheny College. He also taught at Syracuse one year after its opening and helped to instate the College of Fine Arts, becoming the first Dean of the College of Fine Arts, and making Syracuse the first university in America to offer bachelor’s and master’s degrees in the fine arts. During his active years, he helped found the Everson and the Met, and published a book titled Art Museums in America, where he outlined his vision for museums and museum education.

Based on the content in his papers, Comfort was open-minded to the art that these institutions would collect and display, and he was interested in commissioning contemporary artists and facilitating loan exhibitions to show the progression of art from objects in American collections. Many scholars at this time were interested in the old masters, whereas Comfort did not care about the label, he just wanted good art. In Art Museums in America, he stated, “By commissioning only mature and first-class artists, we can form a gallery of the rise and progress of painting and of the many schools of this branch of art.” 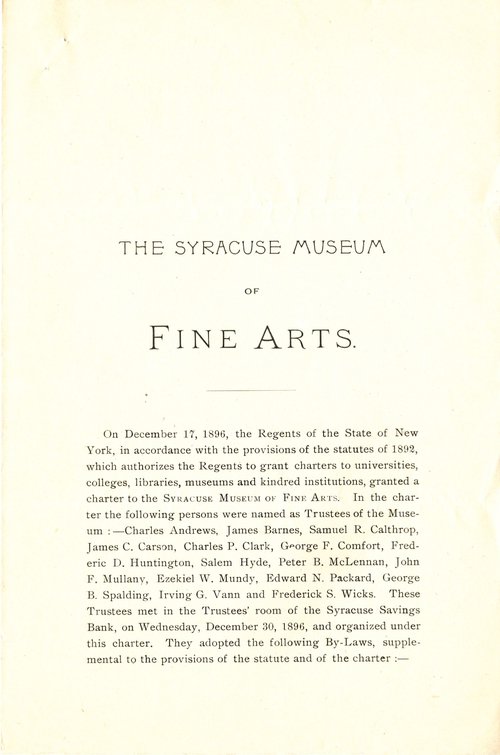 First page of the bylaws of the Syracuse Museum of Fine Arts, later the Everson Museum of Art.

In his essay about the Development of the Syracuse Museum of Fine Arts, Comfort said of the Everson and other smaller-scale museums outside of large cities, that they were to rely on reproductions such as photographs, engravings, and casts of objects to build their collections as they could not obtain the famous masterpieces as easily as the heavily endowed institutions like the Met. In a turn of events, the Everson is currently selling one of its masterpieces, its only Jackson Pollock painting, in order to obtain works by lesser-known and more diverse artists. This is a big step for the future of the museum to build its collection in two key ways: to represent the local community and to reflect on the issue of race in America. Although Comfort enjoyed his masterpieces, I think he would have been proud of this feat. That a smaller museum like the Everson was able to own an American masterpiece, and decide to de-accession it for the betterment of the museum’s future and collect different kinds of masterpieces speaks volumes. Comfort believed that museums should represent the growth of their communities by “illustrating the history of the origin, the rise, the growth, the culminating glory, and the periods of decline and decadence… true art is cosmopolitan. It knows no country; it knows no age.”

This year is the Met’s 150th anniversary, and to celebrate there is an exhibition titled, Making the Met: 1870 – 2020, that exhibits 250 objects that were collected within the museum’s first decades. The objects are from all over the world and span millennia. The non-Western art in this current exhibit is intended to be understood outside the lenses of exotica and orientalism, which was how it was supposedly displayed and understood in the earliest exhibitions, according to the curators of the exhibit. For years, museums predominantly functioned with wealthy white men acting as the stewards of the art of Africa, Asia, and the Americas, a set-up that has largely remained intact to this day. 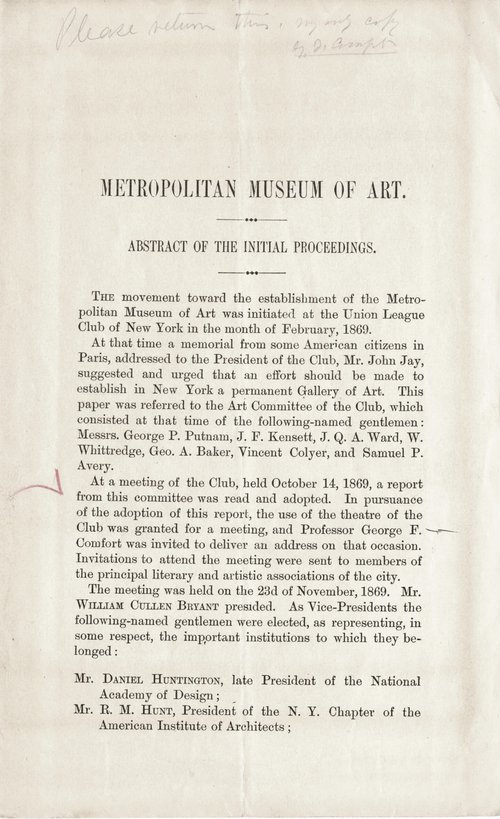 The first page of the “Abstract of the Initial Proceedings” for the Metropolitan Museum of Art. 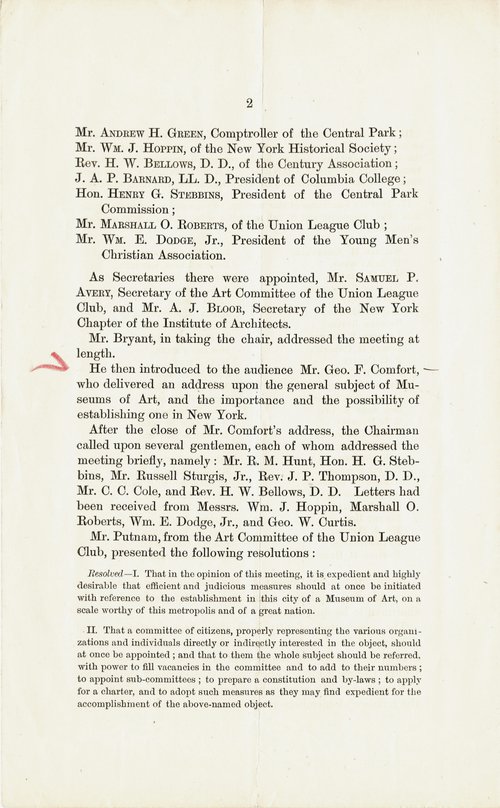 The second page of the “Abstract of the Initial Proceedings” for the Metropolitan Museum of Art.

Art and cultural institutions like the Met have been heavily critiqued in the past decades, especially recently in terms of racial injustice and hiring practices. BIPOC voices have been largely excluded from these spaces for many years. And, although some women were employed by the Met in its early years of operating, they were not included in board of trustee meetings or welcomed at the higher level of operations, as a photographs and documentation from the initial proceedings of Metropolitan Museum of Art meeting of 1869 in the George Fisk Comfort Family Collection can attest. For the first time in its history, the Met has just hired its first full-time Native American curator years after Native American art has been displayed with the art of Africa, Oceania, and the Americas. This act shows that museums are slowly evolving with the pushback from the public. Similarly, the Everson’s plan to buy and exhibit art by BIPOC artists is a small but important step towards true neutrality in institutions. As institutions move forward and take steps to change their collecting and hiring practices, it remains uncertain whether these spaces can ever fully decolonize. 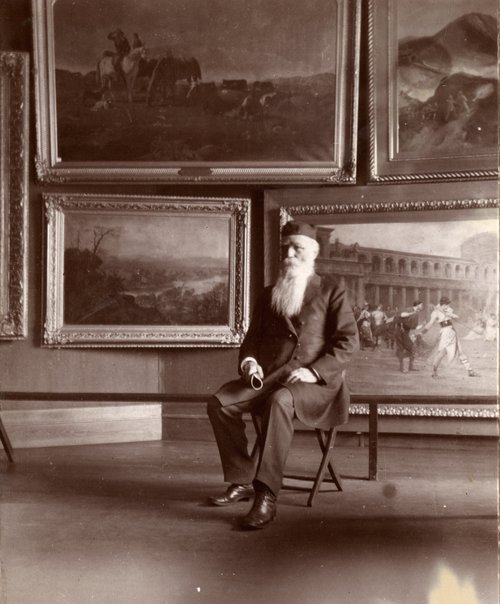 Through the George Fisk Comfort Family Collection, we can understand the basis on which museums and cultural institutions were founded in the nineteenth century. The George Fisk Comfort Family Collection helped inform my understanding of the Museums Are Not Neutral movement in terms of museum history. The fact that the Met was attempting to diversify how the typical European museum functioned proves how someone like Comfort served as a good advocate for change and stewardship in the 19th century. As the Met looks to its past and the Everson roots itself in the present for a better future, one takeaway for cultural institutions should be how to rally for their own communities. Changes in diversity and inclusion start internally with staff, collections, and exhibitions. It is only once these changes are addressed that institutions can move forward from their colonial ideologies to become truly neutral.

“‘Museums Do Not Need to Be Neutral, They Need to Be Independent.’” ICOM, icom.museum/en/news/museums-do-not-need-to-be-neutral-they-need-to-be-independent/.

“Museums Have Never Been Neutral, But They Should Be.” Brenham Heritage Museum, 27 Oct. 2017, www.brenhamheritagemuseum.org/museums-never-neutral/.