Marketing and Publicity and Press, Oh My!

The marketing campaign for The Wizard of Oz film

“Pay no attention to that man behind the curtain!” the Wizard of Oz announces in a harassed tone toward the end of the eponymous 1939 film. At this moment, the main characters – Dorothy, the Scarecrow, the Tin Man, and the Cowardly Lion – are presented with two realities: Oz, the Great and Powerful, a terrifying confection of amplified sound and green smoke, and Oz, a humble and humbled Kansas man. The pair live on the screen simultaneously for a moment. Then, the smoke disappears and Oz’s voice retreats to that of a humbug. 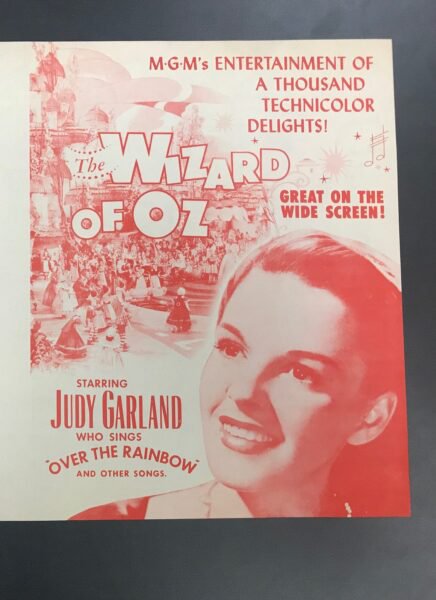 An MGM poster for The Wizard of Oz prominently featuring Judy Garland, who starred as Dorothy Gale in the picture. L. Frank Baum Papers. 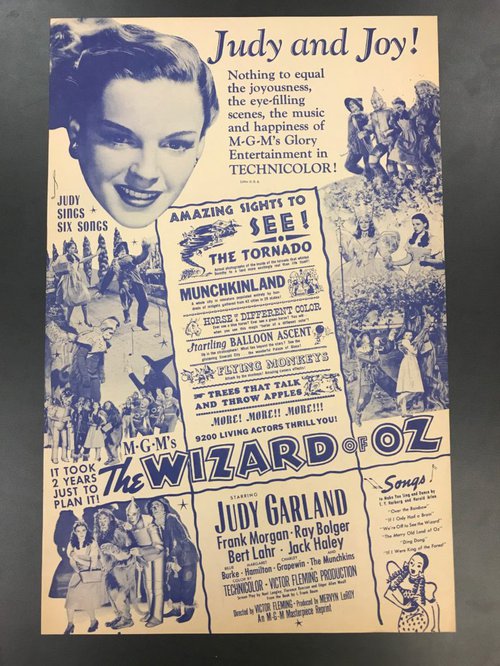 The Judy and Joy! promotional poster featuring a circus-board advertisement with references to all of the great technical achievements of the film. L. Frank Baum Papers.

The marketing campaign for The Wizard of Oz film, based on L. Frank Baum's 1900 highly successful and popular children's book The Wonderful Wizard of Oz, seems to take its cues from this scene in the movie, presenting the picture as both a grand fantasy adventure and an incredible technical achievement in film making. At SCRC, we are lucky enough to hold some of the marketing materials from The Wizard of Oz film, both from the film’s original 1939 release, as well as its first reprint in 1949, in our L. Frank Baum Papers. Baum was a native of Chittenango, NY and spent time working in Syracuse as well.

The materials in Baum's papers include behind-the-scenes articles written about the film, movie posters and leaflets, and MGM promotional materials. One of the posters for the Technicolor musical proclaims, “It took 2 years just to plan it!” and “9,200 living actors thrill you!” and features a circus-style advertising board that includes:

The Tornado: Actual photographs of the inside of the tornado that whirled Dorothy to a land more excitingly real than life itself!
Munchkinland: A whole city in miniature populated entirely by hundreds of midgets gather from 42 cities in 29 states!
Flying Monkeys: Attack by the monkeys! Amazing camera effects!

In all of these entries, the spectacle (tornadoes, Munchkinland, and flying monkeys) is juxtaposed with the practical (“actual photographs,” “gather from 42 cities in 29 states,” “amazing camera effects”), all to create "a land more excitingly real than life itself!"

The L. Frank Baum Papers also include magazine articles with behind-the-scenes stories about the film, including an article written for the August 1939 issue of Good Housekeeping. Many of the standard pieces of trivia recited today about The Wizard of Oz come from the information provided in early press coverage of the film. Those stories include the following: The silver slippers from L. Frank Baum's books were transformed ruby red to take full advantage of the Technicolor technology in the picture. Several cast members, including the original Tin Man, Buddy Ebsen, and the Wicked Witch of the West, Margaret Hamilton, suffered injuries due to the heavy makeup and extensive special effects in the film. Hollywood executives thought "Over the Rainbow" was slowing down the pace of the story and the song was nearly cut from the picture. 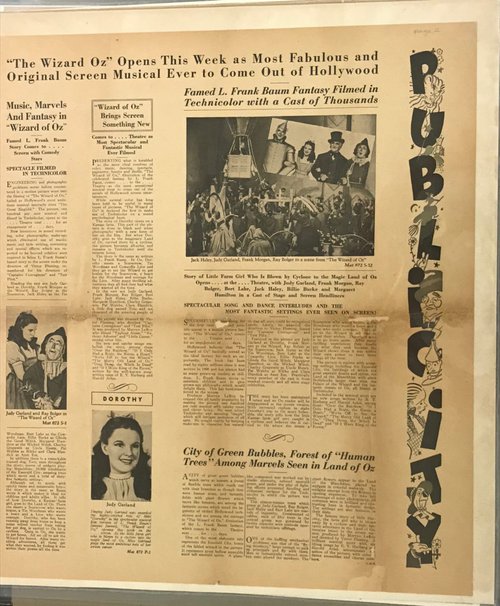 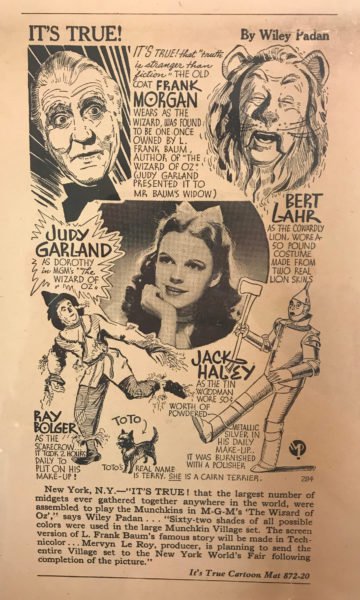 This Oz article announces, “It’s True!” and notes, “Truth is stranger than fiction. The old coat Frank Morgan wears as the Wizard, was found to be one once owned by L. Frank Baum, author of “The Wizard of Oz.” L. Frank Baum Papers.

Some of the press coverage, created by MGM and other reporters, however, leaned closer to myth-making than fact. One well-worn bit of trivia that has always fascinated me, but never seems to have been fully proved or disproved, however, is the story of Professor Marvel's coat. Typically, this anecdotal bit is told as follows: The costume department needed to find an old, tattered coat that could be worn by Frank Morgan as Professor Marvel in the sepia-toned Kansas portion of the film (Morgan also plays the Wizard of Oz on the Technicolor side). Picking a coat off a rack at a second-hand store in the Los Angeles, the costume designer, or Frank Morgan (depending on the version of the story you are hearing), discovered "L. Frank Baum" stitched into the lining of the coat, or discovered L. Frank Baum on a piece of paper inside the coat (depending on the version of the story you are hearing).

In the Good Housekeeping article, however, a similar story is related, but in this version of the tale, the story is told as follows:

"Last fall, when they were getting costumes ready for The Wizard, a messenger was sent out to scour the secondhand stores for a ragged old topcoat to use for the Scarecrow. He bought one in the first pawnshop he tried. Big, tattered, just the thing. It was okayed by the Wardrobe department. Then--not until then--did they find the initials, sewed fast in the lining: 'L.F.B.'"

While this cannot be taken as definitive proof that L. Frank Baum's coat was never actually found or used in the film, either worn by Professor Marvel or the Scarecrow, it certainly points to some cracks in the story's construction. Perhaps it was thought to make a better story that the Wizard's coat had once been worn by the "Wizard" himself, the author of the story, rather than the Scarecrow, and the story was altered to reflect this telling. It may be that this story, sometimes considered to be crafted to create additional publicity for the film, is itself a fable.

What is definitely true, however, is the amount of time, money, and publicity, that were spent on making The Wizard of Oz come to life: 9,200 actors participated in the film and MGM spent $3 million dollars to make the film ($55.5 million dollars today).

This year marks 80 years since The Wizard of Oz's release, which debuted in cinemas in 1939, a year that is regularly demarcated as one of the greatest years in film history. A slew of highly regarded and commercially successful films were produced that year – Gone With the Wind, Mr. Smith Goes to Washington, Dark Victory, Ninotchka, The Women, Of Mice and Men, Wuthering Heights – and, of course, The Wizard of Oz. 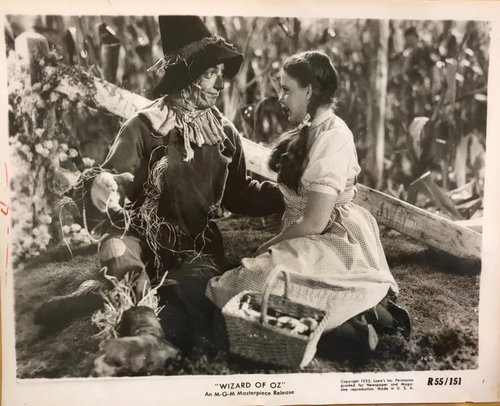 Dorothy and the Scarecrow in a still from the film, part of MGM's press materials for the film. L. Frank Baum Papers. 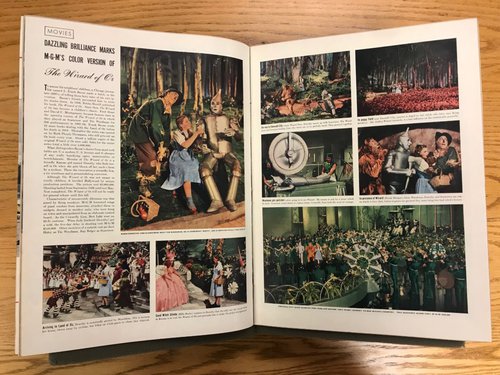 The two-page “Oz” spread that featured in the July 17, 1939 issue of Life Magazine. Rare books.