The book of poetry Betcha Ain’t: Poems from Attica exemplifies the press’s commitment to publishing voices that may not otherwise exist. 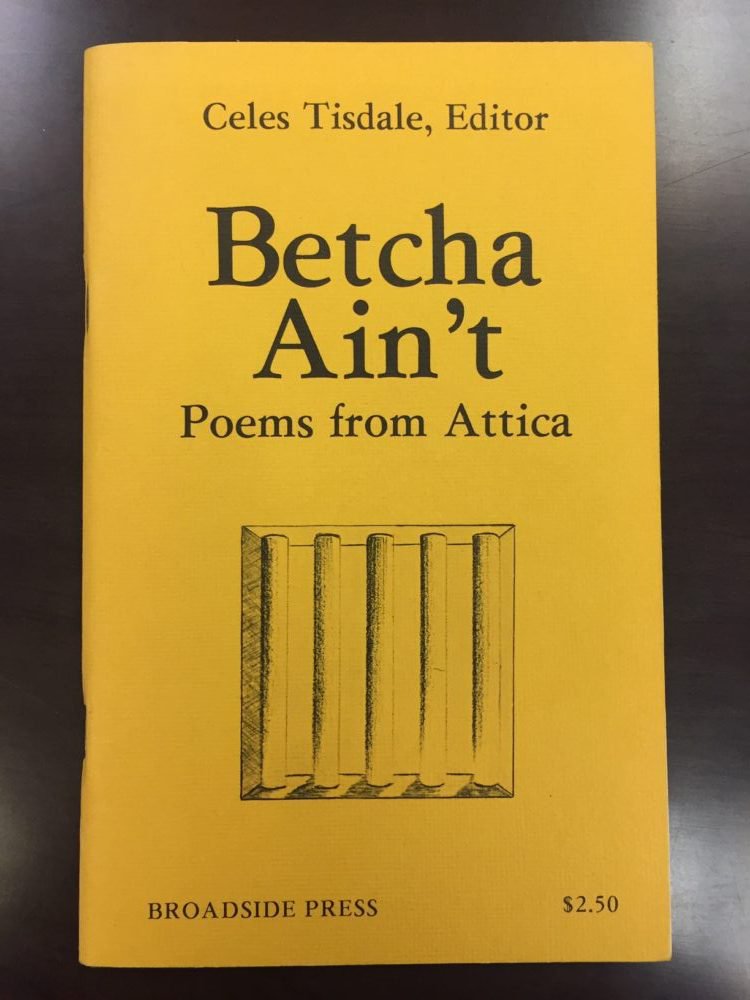 Student workers join the Special Collections Research Center over the summer to work on focused projects and internships. For the month of August we will be highlighting student work and student research projects from summer 2019. This week, we highlight a research post from one of our public services graduate student workers.

As part of its large collection of activism and social reform materials, Syracuse University’s Special Collections Research Center holds nearly 170 titles from poet Dudley Randall’s Broadside Press, a small press that sought to publish books by African-American poets such as Nikki Giovanni and Audre Lorde at affordable prices. The book of poetry Betcha Ain’t: Poems from Attica exemplifies the press’s commitment to publishing voices that may not otherwise exist.

On September 9, 1971, over 1,200 prisoners at the Attica State Correctional Facility in upstate New York took 39 corrections officers hostage and occupied the prison’s main yard for four days, demanding long-awaited improvements to the prison’s deplorable conditions. The standoff drew international attention as inmates negotiated for these changes with State Corrections Commissioner Russell Oswald. The negotiations eventually stalled, and on September 13, when Governor Nelson Rockefeller ordered state troopers to retake the prison by force. Some troopers dropped tear gas from helicopters while others stormed the prison and fired their rifles into the smoky yard killing hostages and inmates alike and ending with more than 40 casualties.

Edited by Celes Tisdale three years after the rebellion, Betcha Ain’t contains poems by Attica inmates. Tisdale held multiple eight-week poetry workshops in Attica in 1972, working with 15 men chosen by a lottery system. In the workshops, the men discussed various poetic forms and workshopped their own original writing, honing their poetic voices. Tisdale then submitted the poems to the Broadside Press editor Dudley Randall, who then made the final selections.

The poems are about an array of topics, such as prison life, societal racism, and celebrations of blackness. And, not surprisingly, many are about the Attica uprising and its bloody aftermath. For instance, in his poem “1st page,” Daniel Brown imagines himself physically freed from Attica, but still mentally gripped by it: “I’ll find a house or hut to live in / In a lonely countryside / With Atticka on my mind.” Such feelings of loneliness not only stem from the physical isolation of incarceration, but also the sense of being forgotten or disregarded by the outside world. John Lee Norris’s poem “Just Another Page (September 13-72)” grapples with similar themes, as it expresses the sense that a year after the uprising, the world beyond prison walls has already forgotten about the rebellion: 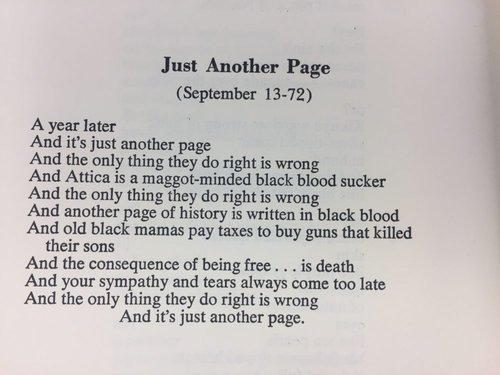 Also included in Betcha Ain’t are excerpts from Tisdale’s personal journal about the workshops, along with individual biographies of each poet. The journal entries depict a relationship founded in a shared sense of respect and intellectual camaraderie: “The men joke with me as we enter and leave, but I still detect great respect, almost an awe, a stand-offish attitude. I see them as the men I relate to every day in the world outside. How it pains me when they go back to their cells, but linger and talk before the guard hurries them along. If I could only stay here a few days more.” His entries also attest to the difficulties of running the workshops in Attica, as he must compete with the vagaries of prison life that affect the poets. He describes one attendee who has become “unusually despondent these days. His cell was ‘raided’ by officials and his poetry and books confiscated. He has been very tight, recently.”

The poems in Betcha Ain’t challenged contemporary media depictions of the rebels as a monolith of dangerous, radical leftists. But as my time working in the SCRC Reading Room reminds me, archives are not only a repository of materials, but are also institutions that help shape historical and cultural memory. Indeed, the historian Heather Ann Thompson explains in her book Blood in the Water: The Attica Prison Uprising of 1971 and Its Legacy that a comprehensive history of Attica has been difficult to write, as many of the important documents about what happened during the chaotic retaking of the prison have remained sealed in state archives or are available only in heavily redacted form through Freedom of Information Act requests. 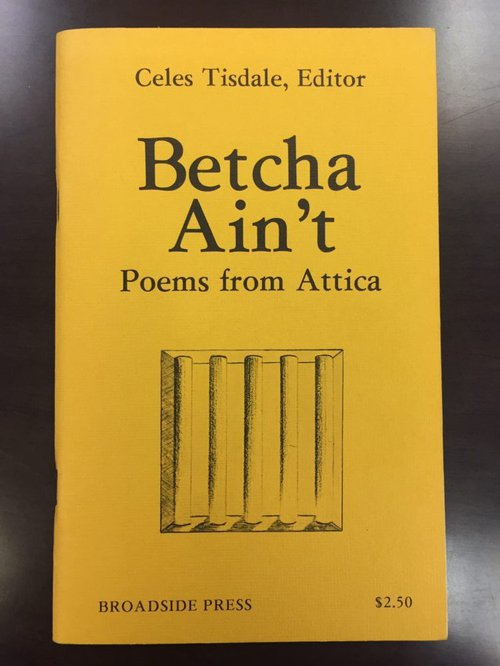 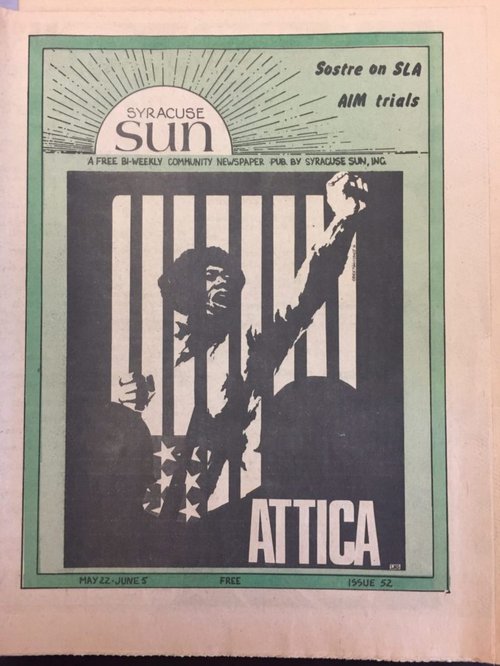 1974 issue of the student publication The Syracuse Sun.

With important documents still inaccessible, a way of learning more about Attica rebellion is through the voices of those who helped shape the publication of texts such as Betcha Ain’t. For researchers interested in these voices, SCRC also holds Syracuse University student publications such as The Syracuse Sun, which covered trials against Attica inmates and also featured letters written by them that tell readers about the ongoing conditions in the prison. These materials offer a look at the ways local activists attempted to rally support on behalf of Attica inmates and to spread the word about the grave injustices continuing to take place at the prison.

The Special Collections Research Center is dedicated to providing opportunities for student learning and research. Stay tuned for more updates from our students throughout the month of August.