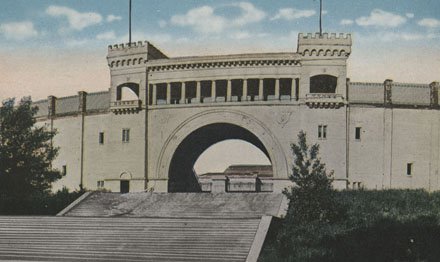 Notes: The stadium was located in a natural hollow at the southwestern corner of campus. Much of the 200,000 cubic yards of earth excavated was used as fill for constructing Carnegie Library. A modern adaptation of the Roman Coliseum, the first football game played in the stadium took place on September 25, 1907 between Hobart and SU. At the time, the exterior of the stadium had not been completed. The final game played in Archbold was on November 11, 1978; SU beat Navy 20-17. The stadium was demolished to allow for construction of the Carrier Dome.