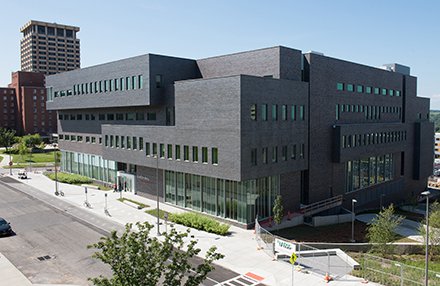 Named for: $15 million naming gift by the Dineen family in honor of their parents Robert Emmet Dineen L'24, H'66, and Carolyn Bareham Dineen L'32
The "Celebratory Space" is named in memory of David Levy '41, L'48 who bequeathed $3 million.

Notes: Dineen Hall, a LEED-certified building was constructed for the Syracuse University College of Law. It contains improved training facilities for the College's championship Moot Court and trial advocacy programs, innovative library spaces with distinctive study rooms, and interdisciplinary teaching spaces for nationally recognized Centers and Institutes. It is situated on a site immediately west of the college's former buildings, White Hall and MacNaughton Hall. The location is especially meaningful to the Dineen family because the building, fittingly, is located not far from the Irish immigrant neighborhood, which was known as "the swamp," where Robert Dineen Sr. was born and raised.