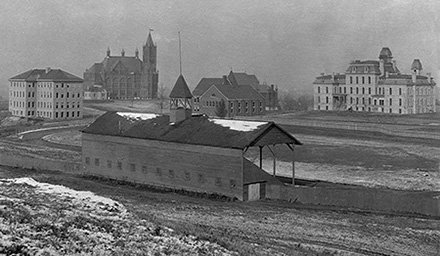 Transformed: Became the Quad in 1929

Notes: In the 1880s, the area that became the Old Oval held a baseball diamond and a cinder track. However, most team sports were played in the public parks around Syracuse. In an effort to make the Oval the center of SU athletics, work to upgrade the baseball field and track commenced in the 1890s with the regrading of the field. On June 8, 1895 the University Oval formally opened as the new athletic field.

With the opening of Archbold Stadium in 1907 most athletic events moved to that more appropriate location. At various times other uses were found for the Oval including a 200 ft. by 150 ft. rose garden, a skating rink, military drills during World War I, and as the terminus of a toboggan slide from Mt. Olympus. As early as 1914 the Oval had become to be known as the "Old Oval." By 1929, the Oval was filled in with earth from various excavations creating the central lawn area known as the quad and in 2010 was dedicated as Kenneth A. Shaw Quadrangle.