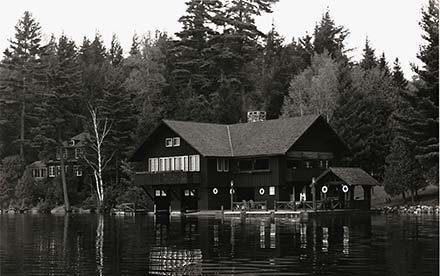 Notes: Pinebrook was one of 3 Adirondack camps, including Sagamore and Minnowbrook Lodge, owned by SU. Just prior to donating the camp to SU, Loeb acquired the adjacent Moss Lodge property, formerly the Ballantyne estate, then being used as a Girl Scout camp, which he included in the donation. Pinebrook Camp was assigned to University College and used primarily as a conference center. The complex of buildings consisted of wood planking outside and varnished wainscoting of pine, cedar and cypress inside. Most buildings included large stone fireplaces and porches. Large water tanks supplied lake water to the cabins and a tennis court provided additional entertainment. In 1948, twelve structures sat on the property: a Swiss chalet style boat house and deck with two boat slips built in 1915 contained a first floor with open rafters and seating in a "rustic design" and a second floor housing a large sitting room; the owner's cabin, built in 1919, also Swiss chalet style; a main building with guest house constructed ca. 1898; a laundry and servant's building; a guide's house; the East guest house built in 1898 by Levi P. Morton, former governor of New York; a pump house and shop built in 1916; an ice house and cooler built in 1918 held 3 large coolers for food; a chauffeur's cabin; garage; wood shed and open well house. In 1950, SU constructed an art studio in order to offer artists' camps.

Pinebrook was also available to faculty and administrators for summer vacation use. In the summer of 1950, more than 200 SU families spent vacation time there. Pinebrook is perhaps best known for the Student Leaders Conferences it hosted beginning in 1949. In 1972 the University sold the estate to private owners due to the high cost of maintaining a facility so far from Syracuse. Sagamore, too, was eventually sold. Minnowbrook Conference Center is still owned and operated by SU.