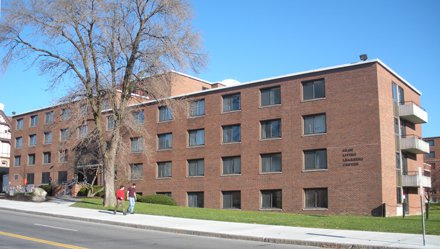 Funding: $1.5 million from estate of May Marguerite Shaw

Named for: Robert Shaw, late husband of May M. Shaw, who started in bakery business in Chicago and later became official at Union Carbide

Notes: Originally named the Robert Shaw Women's Dormitory, Shaw was scheduled to be constructed on Mount Olympus. Delays in the projects caused Chancellor Tolley to transfer the name to the current building already under construction. In 1975, Shaw was designated a Living/Learning Center due to special floors set aside for students from the same school or college in the University.

A new wing added in 1988 had appeared in the original architectural plans but was never built because a neighboring property owner refused to sell the necessary land to SU. In 1998 dining hall was renovated to become Shaw Dining Center.