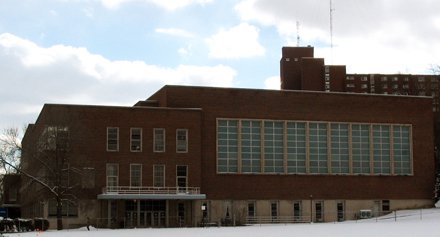 Funding: The Women's Building was the culmination of almost half century effort to establish a building for women's activities and physical education with the impetus coming from the Women's League, Women's Athletic Association, alumnae clubs and other women's organizations. Beginning in 1903 these groups collaborated on fundraising for the building and by 1941 had collected approximately $25,000 through creative means: cookie and chocolate sales, dances, and hot dog sales. In March 1940 the University authorized a two-year campaign to raise $750,000 for the building, and later included the project in its 1941 all-University development program, but World War II brought a halt to the campaign. Again launched in 1949, $430,000 was available for the Women's Building because of previous efforts.

Notes: Previously, the Women's Gym (now no longer existing) housed both men's and women's physical education activities; in 1909 the men moved to the newly built Archbold Gymnasium. However, the Women's Gym was recognized as inadequate for the women students.

The Women's Building served as the hub for women's intercollegiate athletics until 1982, when they merged with the men's program and moved to Manley Field House. By 2010, many of the University's intramural outdoor competitions took place on the Women's Building playing field.