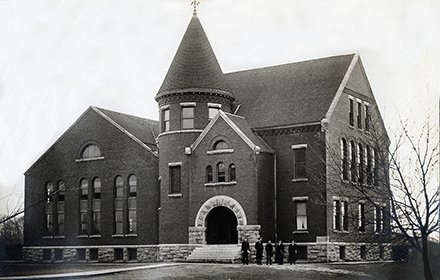 Notes: First called the Gymnasium and YMCA Building, it was erected to house the men's and women's athletic departments and the Students' Christian Association. With separate facilities for men and women, the basement held locker rooms, baths and a swimming pool. The first floor contained the gymnasium floor, while the second floor had a "running gallery."

In 1909 the men moved to the newly-constructed Archbold Gymnasium and the building became known as the Women's Gymnasium or the Old Gym. Repairs and alterations to the structure, funded by Trustee John S. Huyler, removed the old partitions, refurbished the pool and added indoor ranges for rifles and archery. In 1928, the building was relocated to a site between Steele Hall and Archbold Stadium to allow for construction of Hendricks Chapel.

With construction of the Women's Building in 1953, the women's physical education department moved to its new home and the School of Journalism moved into the building. It was demolished in June 1965 to make way for the new Physics Building.