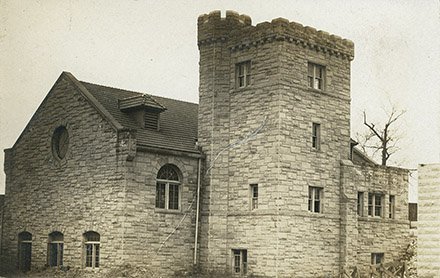 Notes: Styled after the Rheinstein Castle in Germany, the turreted tower enclosed the chimney. Constructed according to engineering practices of the time, the power plant was originally intended to heat only 8 buildings. But as the campus grew more boilers were added until there were 10 hand-fired coal boilers producing steam for heat and electricity. Due to the configuration of too long breeching - the pipes that carried away the smoke - and a too short chimney of only 30' in height, the boilers could not be run to capacity as they would overheat. By 1924 Chancellor Graham had concluded the cost of remodeling the plant was not practical and a new properly-equipped plant was needed. Although a new Steam Plant began operating in 1927, the Power Plant was used until February of 1930 to produce direct current for lighting to the Women's Gym, Lyman, Bowne, Steele, Smith and Machinery Halls, and to power the elevator in Carnegie Library as these had not yet been converted to alternating current.

A new use for the Power Plant building was explored including a student union, an engineering lab, and renovation as a theatre for the Drama department. Demolition, however, was in keeping with the campus master plan laid out in 1928.